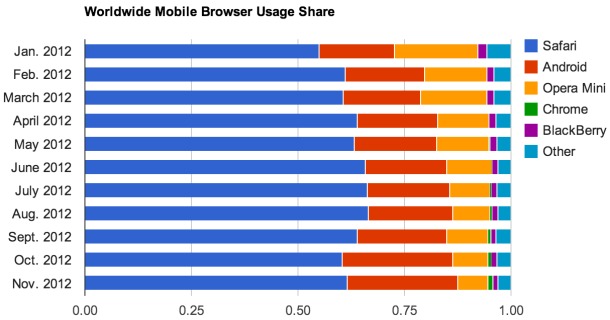 On desktops, Chrome is far and away one of the more popular browsers, but on mobile, it has taken a while to find its footing. Well, according to a new report from Net Applications, Chrome is finally getting a decent amount of usage on Android devices. For iOS, the usage is still negligible, but at least Android users are moving over to Chrome. It shows Google’s efforts with the browser were not a waste of time.

In the month of November, Chrome accounted for 4.03 percent of mobile traffic for the month on Android. While that might seem small, when compared to previous months where it was barely a blip on the radar, it’s quite a large step forward. In all, Chrome accounted for 1.14 percent of mobile usage. Time will tell if the growth for Chrome on Android continues, but it seems to be moving in the right direction.

Chrome on Android only works on devices with Android 4.0 or later. That means that most Android users cannot even use the browser if they want to. Clearly, this means it will be impossible for Chrome to become the number one browser on the platform just based on the numbers. As more devices upgrade to ICS and above, the potential install base will grow even more, and thus, the amount of people using Chrome should grow.

Chrome is very profitable for Google, so obviously, it hopes to see continued growth from the browser. It drives search traffic for Google and it does not require them to share ad revenue with another browser maker. It’s clear that iOS users are content to stick with Mobile Safari, but Android users seem far more receptive to making the switch to Chrome.