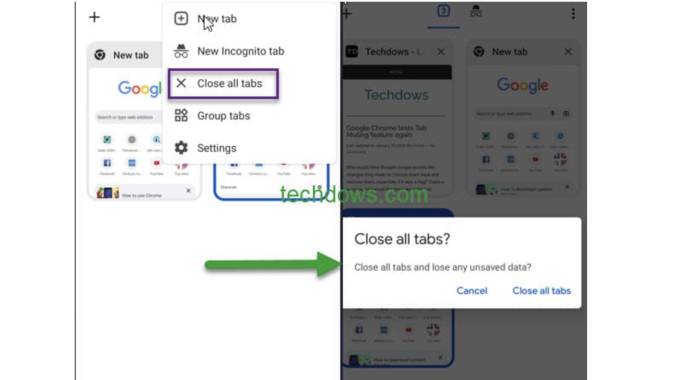 When you have a gazillion tabs open (which you promise yourself you all need) on your mobile device and then you suddenly, accidentally click close all tabs, you may think your life is over. That’s because you only have a few seconds to undo them but after that, they’re gone forever. Well, that is if you’re using Chrome for Android. Finally soon, you’ll get a prompt asking you if you really want to close all the tabs, a basic feature that they should have had in the first place.

TechDows shares that Google is now working on bringing up a confirmation dialog when you tap on the close all tabs option on the Chrome for Android app. The box will ask you if you really want to “close all tabs?” and warns you that if you do, you will lose any data you may have left unsaved. The two options under the question are either cancel, for those who may have mistakenly tapped it, or close all tabs if that’s what you really intended.

Currently, when you choose the close all tabs when you tap the 3-dot menu, you’ll only get a few seconds to undo it if you didn’t really intend to do it. And if you wonder how someone can accidentally do that, you can blame stubby fingers or a slip or distraction, since the option is just below the incognito tab and above the group tabs option. So if you’re not really careful, you will close all of the tabs that you’ve been meaning to get to but didn’t save.

Unlike the desktop version, there’s no option to start the app with the tabs that you previously opened (if you closed them). Previously you had the Chrome Toolbox extension for Windows users but that eventually was discontinued. So now this is something that Google is finally working on even though it’s still in the experimental phase. Those using Chrome Canary can enable the feature through the flags page.

As to when this will roll out to the stable version of Chrome for Android, that’s still anyone’s guess. So for now, if you’re not enabling the flag just yet, be careful when tapping on that three-dot menu lest you’re prepared to lose everything with one tap.