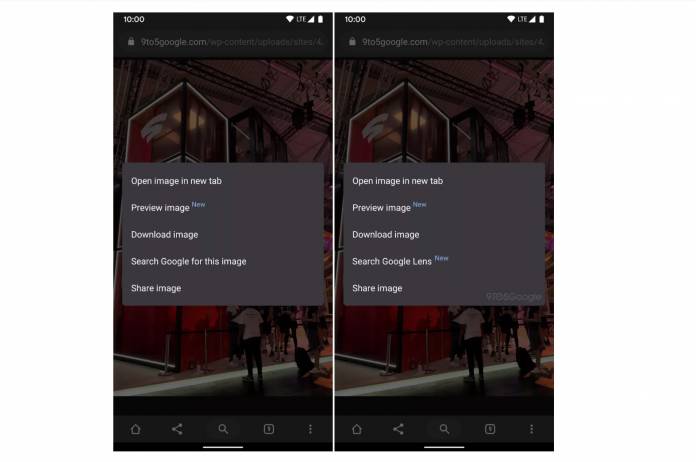 When you’re browsing a website or a social network, you will come across images that you want to know more about. You can always do a reverse image search or use the power of Google Lens. However both involve several complicated steps and if you’re in a hurry, that can sometimes be highly inconvenient. It looks like Google is planning to simplify that process by letting you share an image to Google Lens directly if you’re using the Chrome for Android app.

According to 9 to 5 Google, we might see a new feature on the Chrome app that would make it easier to search for images through Google Lens. Currently, when you want to find out more information about the image, you have to save it to your phone and then go to the Google Lens app and then scan the image there. A code change has been spotted and it will add a new option to the context menu when you tap and hold on an image.

Right now, when you long press a certain image, you will see the option to “Search Google for this image” and it utilises the aforementioned reverse image search capabilities of Chrome for Android. Once the update has been released, you will see a new option that will replace that with “Search with Google Lens”. This way, the image will directly launch an “intent” for the Lens feature through the Google app.

For this to work eventually, you will need to have your Google Search app installed and updated to the latest or at least new enough version. The feature will support version 8.19 and above. If it’s not, the Chrome will go back to using Google Images search if you need more information about the picture that you’re long pressing on. Google also needs to be your default search engine in your Chrome for Android app.

As to when these changes will be implemented, that is the question. For now you’ll have to be satisfied with the aforementioned steps to get the images onto Google Lens.