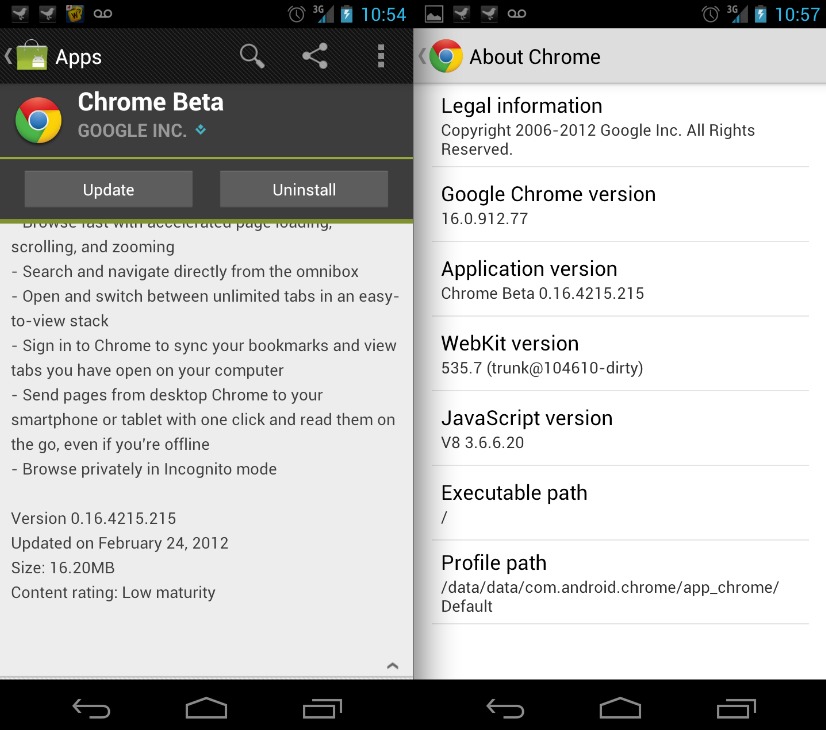 Oh yea! Chrome for Android Beta just received an update from Google over in the Android Market. At first glance we aren’t seeing anything particularly new, not to mention they weren’t nice enough to provide a change log for the update. Most likely the update just brought minor bug or performance fixes although we do have some bad news. The update is causing issues and Chrome for Android is no longer working on custom Android 4.0 ICS ROM’s such as CyanogenMod 9.

Whether this was intentional by Google to get all the devices that aren’t officially running Android 4.0 Ice Cream Sandwich denied access to Chrome or not remains to be seen. While many custom ROM users are most likely to try out beta software, it also makes sense if more users are using the brand new Chrome for Android beta than Google expected. Although they had to know it was coming.

Back to the update, so far nothing really appears to have changed app wise — but wow it’s fast! Nothing in the notes other than the small change in the About Chrome tab for the build version. They must have made some changes to the back end because the browser overall feels much faster. If you weren’t using Chrome before, you should definetaly give it another try now because it is blazing fast. We expect great things from Chrome for Android and so does Google. Most likely we’ll be seeing more updates in the near future to make this the best mobile browser period.

Update: Google has now listed that they’ve added support for multiple countries, as that was an issue when it first launched. More details can be found here.

Are you noticing any changes other than CM9 and some custom ROM’s not working?