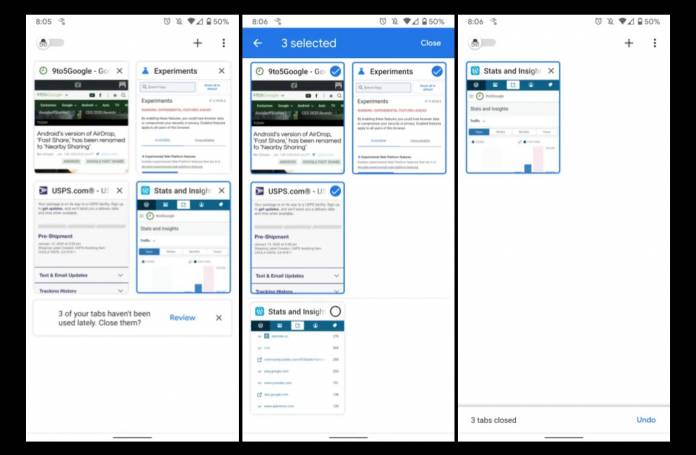 If you’re the type of person that would leave a number of tabs open on their browser, we might have some sort of bad news for you. But this would be good news for those that included keeping digital clutter to a minimum in their New Year’s resolution. It looks like the Chrome for Android app is testing out a feature that would occasionally suggest that you close those stale tabs. The feature can now be enabled in Chrome Canary but there aren’t that many details available for it yet.

9 to 5 Google says that Google has actually been working on this “Suggest to close Tabs” feature since August of last year. It started out hidden behind a flag but now it can be enabled by default on the Chrome Canary build. The description says it will give you suggestions for tabs that have not been used “beyond a configurable threshold” or those that are detected to have duplicate tabs open.

What Chrome will do is analyze when is the last time you opened or used each one of the open tabs on your browser. Once they’re considered to be stale already, there will be a recommendation on the tab switcher to prompt you to close the said tabs. When you tap on that notification, it will not automatically close the tabs but will give you time to review. You can deselect the tabs that are selected if you still want to keep them open for some reason.

However, Google did not indicate what’s the threshold they consider a tab to be stale. The periods indicated in the enabled feature are four hours, eight hours, and seven days. We have no idea if those are the final options but probably not given that it’s still in the testing phase. If the notifications are less than seven days, it might get annoying rather than helpful in keeping digital clutter to a minimum.

As to when this feature will go live is anyone’s guess. But if you know how to manually enable it behind the flag, it’s available in the Chrome 79 stable version. It’s also live in Chrome Canary version 81.