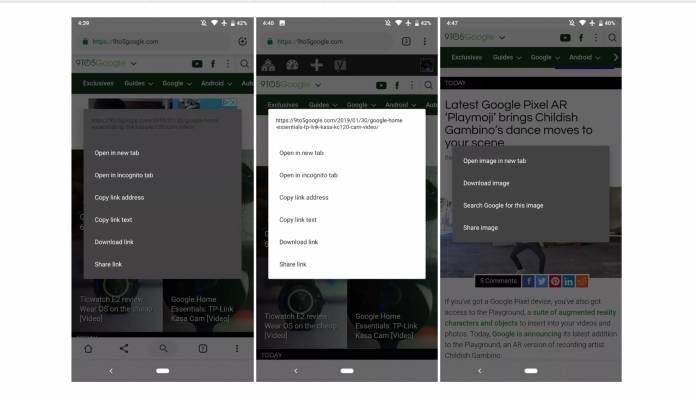 While we’re waiting for the system-wide dark mode that will supposedly be coming to Android Q, we’ll have to be satisfied with seeing individual apps adapt this option. That is, if you like having this option that is good for your eyes and the eyes of the people around you when you’re in a dark environment. Google has been releasing and testing dark mode options for a lot of their apps. The latest one now is Chrome for Android and they’re testing it out on beta version 73.

But don’t get too excited just yet. It seems like they’re still very much in the early stages of testing out the dark mode. First off, it will only appear when you turn on the “Always on” for the Night Mode of the developer options in Android 9.0 Pie. Then it only is visible in the pop-up menus that, well, pop up when you long press on web links or images on your Chrome app. It looks like Incognito Mode, with gray background and white text.

A sign that it’s still early days is that not all text appears in white, which is nearly unreadable when in a gray background. This includes URLs and some of the other random text you’ll see in the pop-up menu. You also will see the dark mode only when you’re in private browsing so if you’re using the regular, normal version, you might not experience the dark mode test.

Over the next few weeks, we’ll probably see more development with this dark mode test. Hopefully, we get a stable version soon as well so that “regular” Chrome for Android users will also get to experience this battery-saving and eyesight-saving option.