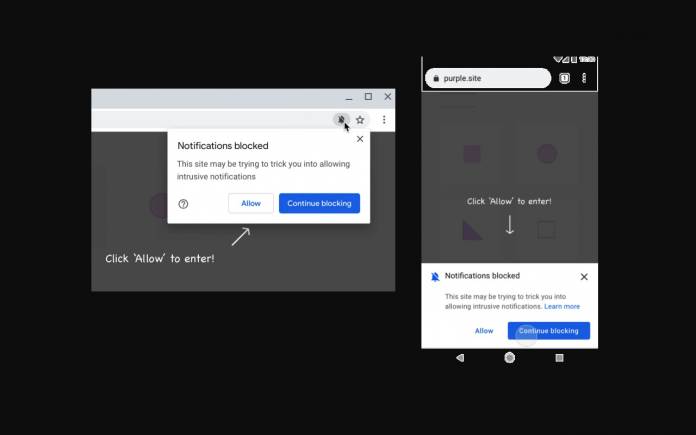 Managing notifications is important especially on one’s mobile device. Since the smartphone is the most accessible gadget that is used every day by almost everyone, it is ideal that a person sets the notifications and alerts he only wants to see and receive. There have been a number of enhancements to how an Android device allows notifications but there are still plenty of rooms for improvement. It’s unfortunate that notifications on phones can be used for fake messages, malware, or phising. If a phone user doesn’t know or isn’t very keen on checking the truthfulness of something, then it can be dangerous.

Such misuse of notifications can be avoided with a recent update from the Chrome team. The web notification ecosystem has been improved. The devs added enforcement for websites that send out notifications that are abusive. Those websites that usually show links to malware or show fake messages have been scrutinized.

More similar efforts have been made like show permission requests when abusive content is detected. The action is automatic and shows a quieter UI. It’s known as the Notification permission UI introduced in Chrome 80.

In Chrome 86 as posted on the Chromium Blog, the focus now is on the notification content. It can be triggered by sources that have a history of sending such abusive messages. You can choose to ‘Allow’ or ‘Continue Blocking’. It’s almost similar to the UI in Chrome 84 but in this update, notification permission requests can now be blocked if the sites have a history or a pattern of malicious behavior.

The Chrome team’s goal is “to improve the experience for Chrome users and to reduce the incentive for abusive sites to misuse the web notifications feature”. Google will take advantage of different techniques to detect such sites: its automated web crawling service, Safe Browsing technology, and checking unresolved issues.