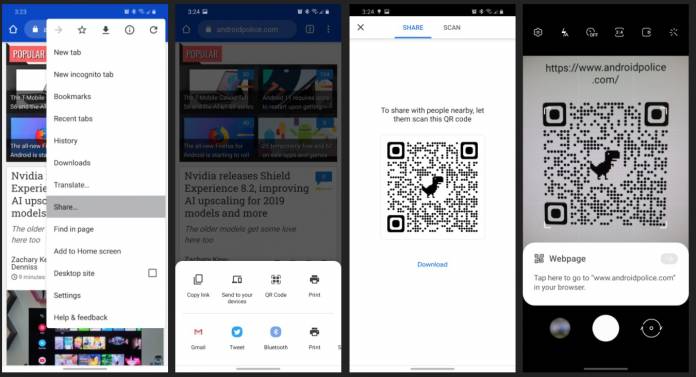 Months before the update to the stable version rolls out, we see varios upcoming features on the Chrome browser on various alpha and beta builds, Canary build, etc. It can sometimes take a while to reach regular users so if you’re impatient, it’s kind of frustrating. But now the stable build of Chrome 85 has started rolling out and we’ll finally see the new share sheet as well as 64-bit support. The last one however seems to be only available for Android 10 devices for now.

We’re used to the usual Android share sheet for years now so it might be disorienting to see the new share sheet but we’ll eventually get used to it. What’s noticeable of course is that it is horizontally-scrolling and the Chrome-specific options are on top. There’s the option to copy the link, share to other Chrome browsers that are under your Google account, create a QR code, or print the page. Under the Chrome buttons, you’ll see the more commonly-used apps and then a more button. Tapping that will lead you to the default share sheet that we know and use (maybe love?).

Chrome 85 will also now support 64-bit builds instead of the 32-bit that we have currently. 64-bit Android devices have been around for a while and so this switch will let the browser use the “vast amounts of RAM” that come with a lot of flagship devices nowadays. It should also seem faster but then again the speed difference may be because of other factors. The bad news however is that 64-bit support seems to be available for Android 10 devices and above only.

Other changes that are in this update include app shortcuts for Progressive Web Apps are enabled by default on desktops, improvements on dragging and dropping on desktop, auto-upgrading of images served from HTTP to HTTPS, and other smaller features for developers. They also seem to be testing out the omnibox options where one hides the full path of the URL until the mouse hovers over the address bar and the other is until a page is interacted with.

Android Police says the update to Chrome 85 has started rolling out after a month of being in the Beta channel. If it’s not there for you yet, you can always make do with an APK download.