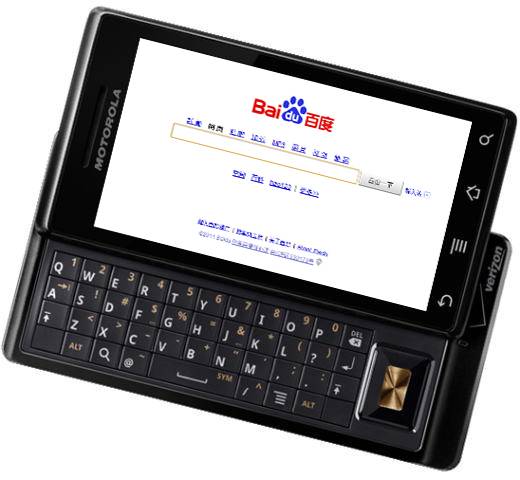 We all love Android’s free and open source-ness, and custom ROMs are one of the best results of that. Well apparently the Chinese search company Baidu loves custom ROMs too! So much, that they’re rumored to be baking their own, to market as an alternative to Android back in China.

Baidu is a Chinese search company, who, if you notice the image of their site on a Motorola Droid above, has borrowed a few things from Google before. Now it looks like their trying to borrow our beloved Android. The Android based OS is rumored to be called Qiushi. When Baidu was questioned, their response was Quishi is the name of a mobile ad product in development. Not exactly definitive.

All questions of how “legal” copying Android would be under Chinese copyright aside, as figuring that out would be an adventure of its own, this could be bad news for Google as they continue to fight for a piece of the ever gigantic Chinese market.

Android is based on Linux, which has plenty of different versions or “distributions.” What do you think of the concept of others taking the source and creating their own “Android distributions?” Maybe in the future we’ll see CyanogenMod, or developer skins grow into their own separate entities should Baidu’s OS take off. As always let us know what your take is in the comments!