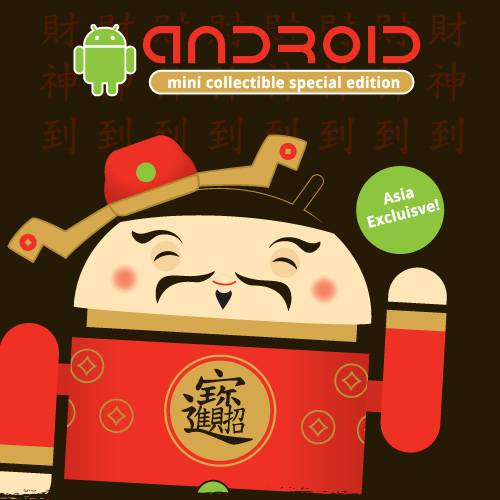 Hooray for more toys! It’s always fun when a brand becomes big enough to spill over into other media, especially when it starts as something as complex as electronics and moves over to something as simple as collectable toys. This little cutie adds to the ranks of mini collectables put out by DYZPlastic and officially endorsed by Google. This newest addition to the crew is an undeniably super kawaii ultra cute Chinese New Year Android man by the name of Cai Shen, the god of wealth.

If you’re lucky enough to work for Google, Inc in Beijing or you happen to live in China or Taiwan, you’ll be able to pick one of these guys up at your local designer toyshop starting January 5th. If you DON’T live over there, getting this toy wont be so easy. There’ll only be a total of 200 in the United States (officially, that is,) and they’ll all be for sale straight from DYZPlastic via a special lottery system. You’ll have to be living in North or South America or Europe (WOW that’s a big region) to enter, and if you win, you’ll be eligible to purchase a single toy for the regular price of $10. You may start to sign up NOW!