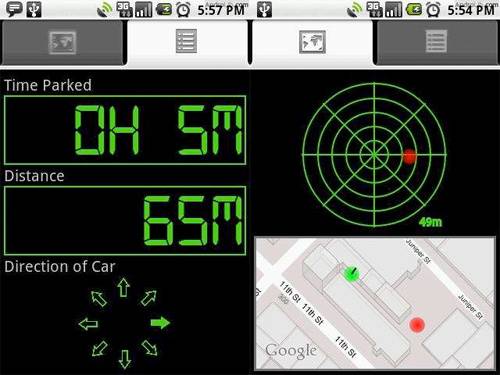 Developer Edward Kim is undoubtedly pleased with his $13,000/month from the Car Locator app in the Android Market. He states that he made this app as a side project while vacationing with family. Not bad for a side project, this app finished third in Google’s Android Developer Challenge 2.

The app is pretty simple, it saves your location wherever you park, and when you return to the area you left your car it will help you navigate back to the location. This was taken from Edward Kim’s blog:

• The application was netting an average of about $80-$100/day, until it became a featured app on the Marketplace. Since then, sales have been phenomenal, netting an average of $435/day, with a one day record of $772 on Valentine’s Day. Too bad I didn’t have a Valentines date this year — we would’ve gone somewhere real special!
• There appears to be clear peaks on the weekends and during holidays. This was always my hunch, but I think I can finally say this with certainty since the signal-to-noise ratio is much better now.
• Some may be quick to point out that a featured Android application is only able to net $400/day, while top iPhone apps make thousands. But the Android market appears to rotate applications in and out of the featured apps list in some psedo-random fashion. Every time I open the Marketplace app, the featured list is different and most of the time, I don’t even see my app on there.
• The price of the application was increased from $1.99 to $3.99. I ran a few price experiments and was surprised to see that though I doubled the price of the app, the number of purchases decreased by much less than half. Android users appear to have a willingness to pay more than a couple dollars for apps.
• Piracy appears to be an increasing problem. A quick search for Car Locator on Twitter reveals links where people can download the .apk file without paying. I tend to have the same attitude on piracy as Balsamiq, so I’m not too worried about it, but I would love to hear some typical statistics on Android piracy.

Things like this will surely attract more dev’s to Android, this shows that you can make money on this platform. If you would like to support this developer and in turn add an awesome app to your collection scan the qr code below