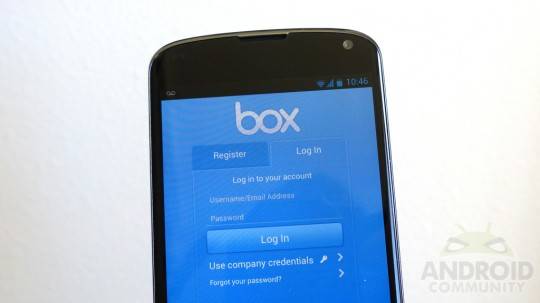 The race for who is the best cloud storage option around has never been tighter. Some of the popular options here on Android are Dropbox and Box.net, with Google Drive still in there somewhere. Today Box is back offering more incentive for users to go their route, by delivering new users 50GB of cloud storage absolutely free. You can never have too much so read on for more details.

This isn’t the first time we’ve seen awesome deals like this from Box, but now that it’s back and available for basically anyone we figured it was worth mentioning. Previously Box was giving 50GB to all LG and Sony smartphone users that downloaded and signed up with the mobile app, but today it is for any new customer.

Basically just head to the sign up page and register an account and you’ll receive 50GB of free cloud storage. That is certainly more than Dropbox offers new customers. For those diehard Dropbox users, we’re with ya, but it never hurts to have another option and extra storage for when you’re in need. It only takes a few minutes so I’d hurry and get it done.

Their Android app was recently updated and improved, and now allows uploads of to 250mb sizes at a time, previously it was only a 100mb limit. They’ve continued to update and improve their app, they offer large file uploads, and now you’ll get 50GB of free storage. Can’t beat that right? Head to the Google Play Store and get the Android app and enjoy that free space.