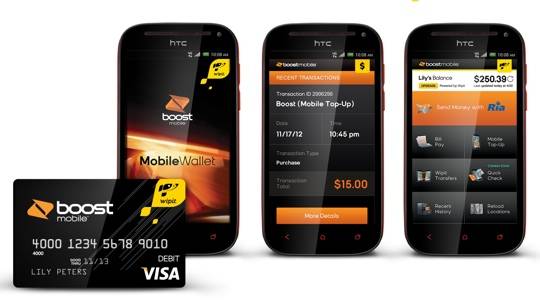 Boost Mobile has officially entered the digital wallet space. Their entry is the Boost Mobile Wallet which is powered by Wipit and intended to offer “convenient and affordable mobile financial services.” Basically, the Boost Mobile Wallet will be for Android handsets and users will be able to send money, pay bills, top-up a wireless account and more. The initial availability will be limited, however a national rollout is expected to begin this summer.

According to details coming from Boost Mobile, the Wallet will be available for users in Los Angeles and San Diego as well as parts of New Jersey. While we suspect many think of a mobile wallet as an app that will allow you to make in-store purchases by swiping your smartphone instead of your credit card. The Boost Mobile Wallet does have a bit more functionality.

Details coming from the announcement note that “on a typical pay day, a Boost Mobile customer might stand in line someplace to cash their paycheck; visit an authorized Boost retail location to add money to their wireless account; and then stand in more lines at multiple locations for money transfers and bill payments.”

We are not exactly sure what this is saying about the Boost Mobile user base, however if that description fits, the Wallet app should help to simplify and streamline the process. The app will allow for the following;

Moving forward there will also be the ability to deposit checks using the camera on your phone. Boost Mobile hasn’t said when this would be arriving and at the moment has left it as coming soon. Otherwise, in addition to the wallet app running on your smartphone, this setup will also include a reloadable Visa prepaid card. The card will be a compliment to the app and allow for in-store swipes wherever Visa is accepted and also for use at an ATM machine for access to cash.

That all being said, while we aren’t sure this will be enough to convince anyone to switch over to Boost Mobile, it could be a nice perk for current customers.