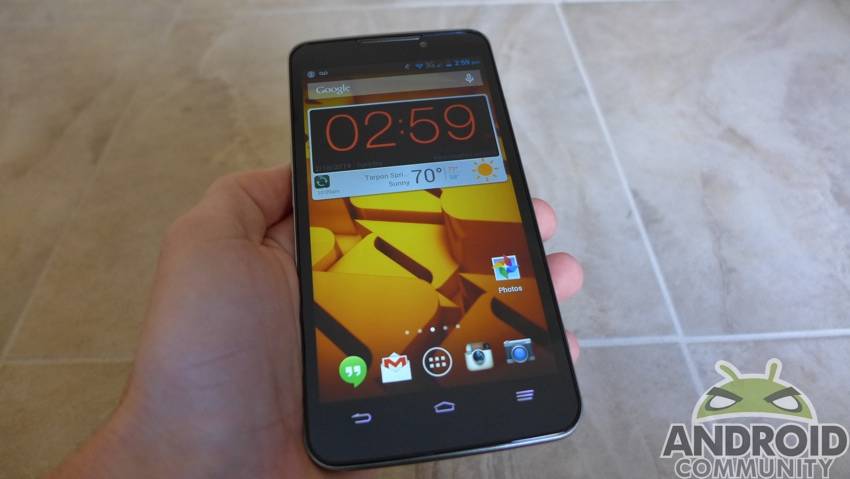 Boost Mobile announced the availability of the Boost MAX towards the end of January. The MAX was originally shown by ZTE during CES and was dubbed the Iconic Phablet. While Boost Mobile may have renamed the handset, they haven’t looked away from the larger size. The MAX is clearly in the phablet category with a 5.7-inch display, and Boost Mobile was touting it as being able to offer the “best of a smartphone and tablet together.” With that in mind, read on to see how well it stood up during our testing period.

At first glance, the phone is big. Given the size of the display, and the overall size of the phone, the MAX branding is quite appropriate. Before we touch on any of the specs, we do have to mention the look and feel of the phone. Two words come to mind — clean and solid. To that point, the clean refers to the lack of branding, and the solid is a bit more obvious — the overall build quality.

There isn’t any Boost Mobile, or ZTE branding to be found. In fact, the only items you’ll find on the handset include a mention of the 8 megapixel rear-facing camera along with the microSD card slot, power button and dedicated camera button labels. And even for those, they are rather muted. Looking at the backside you have the camera and flash in the upper left, speaker towards the bottom, and the overall look has a dark gray border along the top and bottom with a silver through the middle.

The left side has the microSD card slot, volume rocker, and micro USB for charging. The right side has the power and camera buttons. A 3.5mm headphone jack sits on the top, and aside from a microphone, the bottom is clean and clear. Flipping over to the front and you have the earpiece and front-facing camera up towards the top, along with the three navigation buttons on the bottom. Otherwise, the silver that sits across the majority of the back also wraps around just a bit for a thin silver bezel around the front edges.

In the world of overly branded carrier handsets, the Boost MAX is a refreshing change. Shifting away from the look, and over to the feel. As mentioned, the handset is on the solid side. It is also a bit on the heavy side. The Boost MAX weighs in at 6.87 ounces. For comparison, the similarly sized Galaxy Note 3 weighs in at 5.9 ounces. This next point may be somewhat tied to the weight, but the MAX feels really solid. We certainly wouldn’t suggest treating it rough, but it seems like the type of device that can handle a bit of abuse.

Another point for the MAX is the size. Simply put, while the display measures in at 5.7-inches, the overall size has the handset matching closer with 6-inch devices. For reference, the MAX measures in at 6.5 (H) x 3.25 (W) x 0.4 (D) inches. The image sitting below shows the MAX alongside the LG G Flex, HTC One max, and Galaxy Note 3. 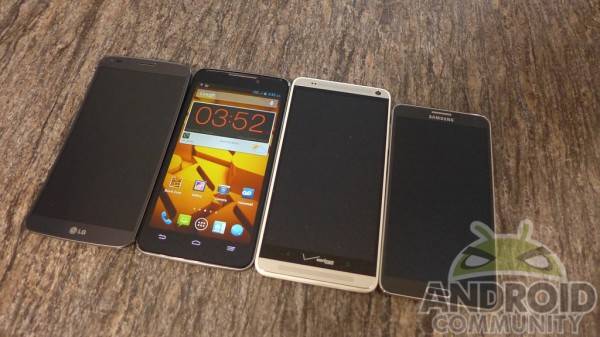 Obviously, a big part of the Boost MAX is the display. Measuring in at 5.7-inches, this one is clearly in the phablet space. There is Gorilla Glass for added protection, and otherwise, the display has a 1280 x 720 resolution with a ppi of 257. Perhaps key here, the display didn’t give us anything to complain about. It was bright, and also seemed to offer solid viewing angles. 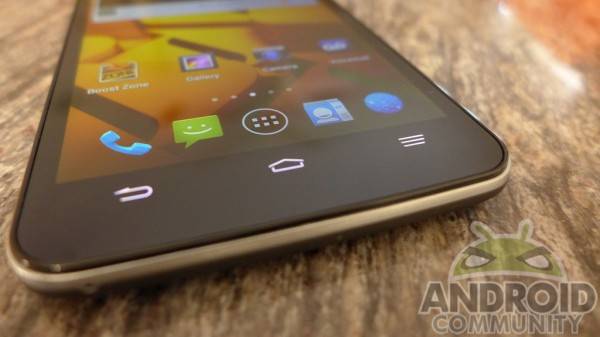 Other specs for the Boost MAX are as follows;

A full tour of the hardware can be seen in our initial hands-on video (sitting below).

Speaking honestly here, the benchmarks for the Boost MAX returned results that we were expecting to see. That is to say the MAX returned results that were comparable to similarly spec’d devices. More important here was how the handset performed in day-to-day use, because in most cases — we are fairly certain people are not going to be checking benchmark reports before heading to a local Boost Mobile retail store.

That being said, similar to the display, there really wasn’t much to complain about here. We used the handset for everything from calls and messaging, to email and some web browsing. Also included in our day-to-day usage was some music streaming, some video streaming, and some light casual gaming. Perhaps an intensive game may have produced some sluggishness, but from what we can see, any potential Boost Mobile customer should be able to take the MAX home without worry.

For those who prefer to see the hard numbers, we did include benchmarks from Quadrant, AnTuTu, and Geekbench 3.

The battery life, thanks to the 3200 mAh battery — was solid. The size of the battery was fitting given the size of the phone, and thanks to that we were able to easily get through a day without worry. We could probably have stretched that to two full days if we were paying a bit closer attention. We can say this, those who sometimes forget to charge their phone before going to bed — you shouldn’t have to worry. We wouldn’t suggest making a habit of keeping the MAX off the charger overnight, but at the same time, provided you bring your cable to work the next morning, you shouldn’t have to worry about running dry mid-commute.

As mentioned, the Boost MAX has both 3G and LTE in terms of connectivity. As with Boost, that means you would be looking towards the Sprint network. Data speeds weren’t the best in the area we did our testing, however voice calling was nothing to worry about. Simply put here, if you are looking to make the jump to Boost Mobile — ask friends or family members about the coverage in the area you live, work and/or play. After all, coverage (and data speeds) can vary widely from market to market.

In terms of sound, the quality varied a bit depending on the method. Using the speakerphone seemed a bit better as compared to listening through the regular earpiece. We felt like we were often turning up the volume when using the regular earpiece, which made it a bit harder in noisy settings. On the flip side, we didn’t hear any complaints from those on the other end of the calls. Listening to music, or the audio coming from a streaming video was more than loud enough and gave us no reason to complain.

The software aspect is where we found our first major complaint. Boost Mobile launched the MAX with Android 4.1.2 Jelly Bean. Depending on the device you are coming from, this may or may not seem like as much of an issue. For us, having been regularly using Kit Kat on other handsets, it felt like we were taking a big step back. Having said that, we were told the MAX will be getting Kit Kat later in the year. A specific timeline, or specific build (4.4, or 4.4.2) was not detailed though.

Moving beyond the version of Android and we found that ZTE did put a bit of consideration into the larger display. There is something called Smart Viewer. Essentially this is a way to multitask. The Smart Viewer option allows the user to run multiple apps at the same time. Accessing this is simple and requires nothing more than long pressing the back button. This brings up a menu with the compatible apps, and from here, you simply drag the app(s) you want or need. And nicely, once the apps are running, you can resize the windows. 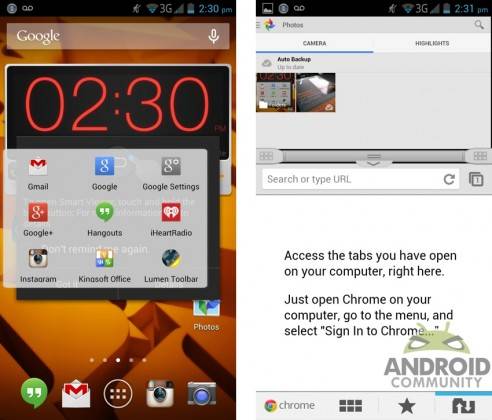 Aside from Android as a whole, and the Smart Viewer setup, Boost Mobile also has some other touches. The lockscreen (by default) offers the date and time, as well as quick access to the camera and sound. Users unlock the MAX by pressing and holding a “Start” button which sits towards the bottom, and centered from left to right. 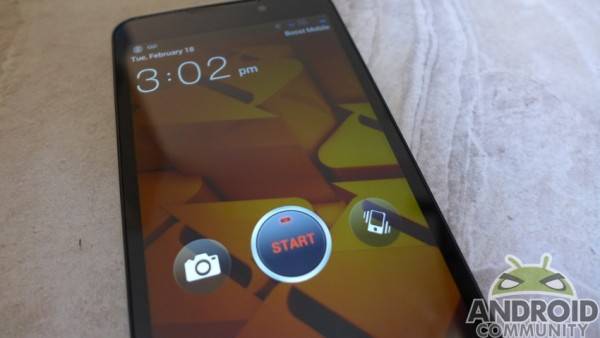 In terms of apps, this is a Google device, which means the full suite of Google apps are included. As well, the Play Store is available for anything else you may want or need to install. Along with the basic Google apps, there were also a selection of Boost-branded apps including Boost Music and Boost Zone. Some of the other pre-installed apps (there were more than a handful) included iHeartRadio, Kingsoft Office, Lumen Toolbar, Mobile ID, Next Radio, Sound Tracking, and others. Users will also find the Dolby and Qualcomm Enhanced apps.

The camera is often a feature people want to know about. In this case that means a 1MP camera on the front, and an 8MP camera on the back. These record 720p and 1080p video respectively. The basics for the camera are all included. That is to say you will find it quick and easy to switch between the front and rear-facing camera. As well, the flash adjustments, and other settings are all easily accessible from icons on the left hand side. 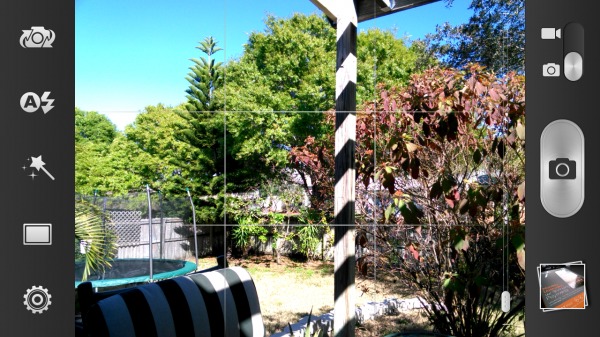 The MAX offers options for regular image capture, as well as HDR, Panorama, Low Light, and numerous others. There is also a timer, the ability to adjust white balance, ISO, and add the grid if you prefer to have that when lining up shots. Similar to making setting related adjustments, you can also quickly switch between still and video from an icon sitting on the right hand side.

We didn’t have any real complaints in terms of the image quality, however as always, we took a variety of shots and will let you be the judge in terms of quality. For reference, the pictures were taken in a variety of settings, without having made any adjustments or tweaks to the settings. And perhaps most important — they were uploaded here without any editing. The image gallery, as well as a sample video are both sitting below.

All said and done, the Boost MAX is a solid performer and should be a device considered by any Boost Mobile customer looking for a bigger screen. In fact, given the size, this handset could serve as a large phone, and also a small tablet for some users. The display, overall performance, battery life, and camera all proved to be solid during our testing time. We also really liked the overall look, and the lack of branding. The device was clean, and as mentioned earlier in the review — it feels rather sturdy. Boost Mobile has the MAX priced at $299, and offers options for monthly or daily plans.