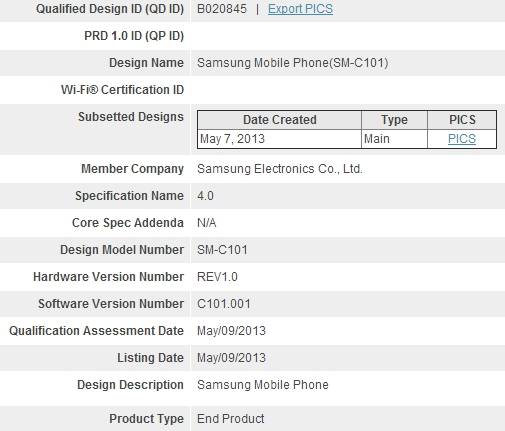 If you follow the smartphone and technology world, you may be familiar with the Bluetooth SIG. That is an organization that lays hands on pretty much every device that uses Bluetooth to ensure that it works as it is supposed to. Some documents have turned up over on the Bluetooth SIG that seem to show that the rumored Samsung Galaxy S 4 Zoom is an actual device.

That is of course assuming that the part numbers that have been rumored to go along with the also rumored Galaxy S 4 Zoom, SM-C1010 and SM-C101, are accurate. The information on the Bluetooth SIG website really sheds no light on exactly what the device will offer. The only thing it does have is a design name listing Samsung Mobile Phone SM-C101.

Rumors insist that the Galaxy S 4 Zoom will look like the S 4 Mini. The most interesting feature rumored for the Zoom is an impressive camera. The rear camera is said to feature 16-megapixel resolution and optical zoom. Clearly, that rumored optical zoom is where the device gets its name.

Other details of the phone that had been rumored include a launch date of early June. The phone will come in black first and as a white version is tipped. Exactly how much the phone will cost is unknown, but if any of these rumors are accurate it sounds like a high-end device.