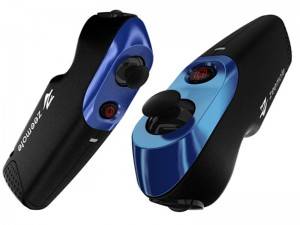 This would be totally cool, can you imagine playing all your games on your handset with a Bluetooth controller? Zeemote has just released an Android SDK for their JS1 controller. Most Android devices would benefit from this because it will be compatible with 1.6 and up. By the time developers integrate this remote into their games, most phones should have their update.

These controllers will help bring a console like gaming experience to Android. the fact of the matter is, even the best games on Android are hard to control with the onscreen touch buttons or even the accelerometer. Developers can register for the new SDK on the Zeemote website.

By integrating Zeemote SDKs into their existing and future applications, developers can:

Jim Adams, business development at Zeemote, said, “By adding the exciting Android SDK to our stable of supported platforms, we are able to give developers an excellent way in which to make their applications really stand out from the crowd. The Android community is proving itself to be wildly creative, pushing the boundaries of convention for mobile applications. When combined with the Zeemote JS1 Controller we expect to see some radical application creativity coming out of the Android community.”