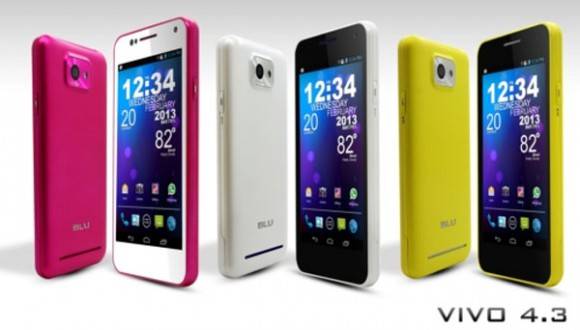 BLU Products makes some inexpensive unlocked Android smartphones. One of the company’s more popular products is called the Vivo 4.3. The company has announced today that it has launched a new Android software update for the smartphone.

The Android update brings the smartphone to Android 4.1. The update optimizes the user experience on the device and brings better performance, improved search, better touchscreen responsiveness, and actionable notifications. BLU is also announced that it has ditched its custom Android launcher and will be using the standard Android launcher moving forward.

That will be good news to a lot of people who prefer no custom software between them and Android. The company says it will begin using the standard Android launcher for all of its products and in all future firmware updates. The update also promises improved battery life and more.

The company has also announced three new colors for the Vivo 4.3. The new colors include pink, white, and yellow. Other than new colors the features of the phone remain the same including a 4.3-inch display with a resolution of 480 x 800 and 4 GB of internal storage. The phone also features an eight-megapixel rear camera with a 1.3-megapixel front camera, Bluetooth, and Wi-Fi. The new software update should be available to download now.