Mobile phone manufacturer BLU has just added three new smartphones to its DASH line that are aimed to be easy on the wallet as well as easy for beginners. The DASH JR, DASH MUSIC 4.0, and DASH 5.0 are meant to help transform feature phone fiddlers into smartphone savants.

The DASH JR is an entry level phone with entry level specs. A 1 GHz Cortex-A5 Spreadtrum 6820 processor and 256 MB of RAM powers the device, paired with a MALI 400 graphics chip. It has a 3.5-inch HVGA TFT screen with a resolution of 320×480 pixels. It features a 2 megapixel camera that is capable of shooting 480p videos at 30 fps. It only has 512 MB of internal storage but is expandable with a microSD card. Not surprisingly, the DASH JR only runs Android 2.3 Gingerbread.

The other two smartphones break into Android 4.2 Jelly Bean territory. The DASH MUSIC 4.0 is, as the name implies, built for music and video. Running on a dual-core 1.3 GHz MediaTek MT6572 chip with 512 MB of RAM, the DASH MUSIC 4.0 is decked with a 4.0-inch 480×800 TFT LCD. A MALI 400 GPU, dual front-facing speakers, and a 3.2 megapixel rear camera give the smartphone its multimedia flavor. The DASH 5.0, on the other hand, answers the need for larger screens, featuring a 5.0-inch 480×854 FWVGA display. It also has a 5.0 megapixel camera and a VGA front-facing camera. Both the DASH MUSIC 4.0 and the DASH 5.0 come with 4 GB of internal memory and dual SIM functionality. 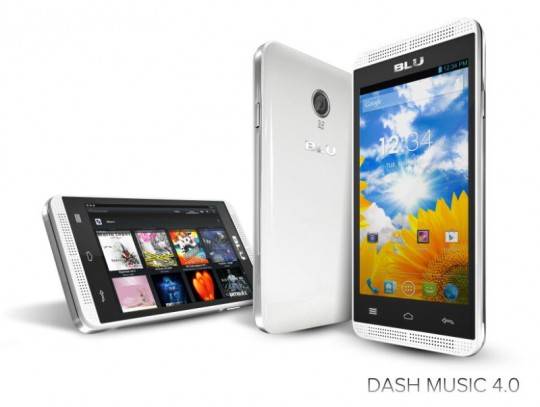 The three smartphones are definitely nothing to write home about but their price might be. The DASH JR has a sub-$50 price tag, while the DASH MUSIC 4.0 will sell for $99 and the DASH 5.0 for $129. All three will be sold unlocked and will come with six color options.