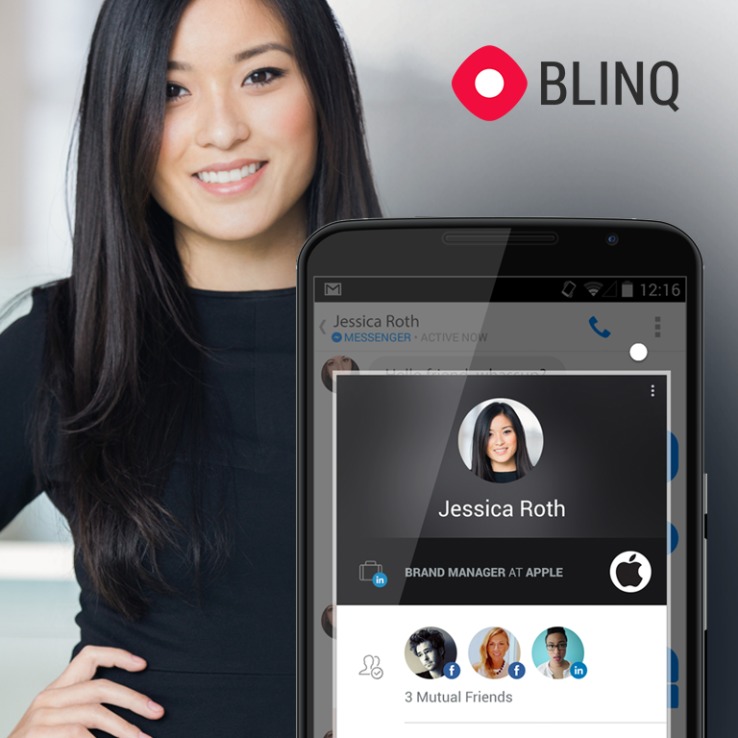 Probably all of us who are living in the digital, mobile world, has experienced this at one point or another. You’re chatting with a colleague, acquaintance, or friend, when you suddenly realized you’re missing some information about them, and so you have to go to their social networks (if you’re connected) to look for that crucial piece. It’s sometimes a hassle to move from your conversation to searching for information, so an app will make things easier for you. Welcome Blinq to your life.

The developers of Blinq said they consider themselves more of a hack than an app, because it will not replace your current crop of messaging apps, but instead, will enhance them. Once you’ve installed it on your device and connected it to your Messenger, WhatsApp, Hangouts, Skype, SMS, etc, it will appear as a small white dot that will pop up when you’re talking to someone, showing their latest updates on their social networks, like Facebook, Twitter, Instagram, LinkedIn, etc. The algorithm of this app will show you which are the more important information first (She just got engaged!) and the more trivial ones last (She had a pancake for breakfast!).

The newest update for the app has added a few more important features. It now has a red animation if your contact has posted something really important in the last hour before you started conversing. It also now supports 227 country codes that will be useful for you when searching for phone numbers. Some bug fixes and improvements, as well as fixing different crashing problems, are also included in the update.

For now, the app only works with messaging services, but if it clicks with the market, the developers may actually use it for other services as well. You can download Blinq from the Google Play Store for free.