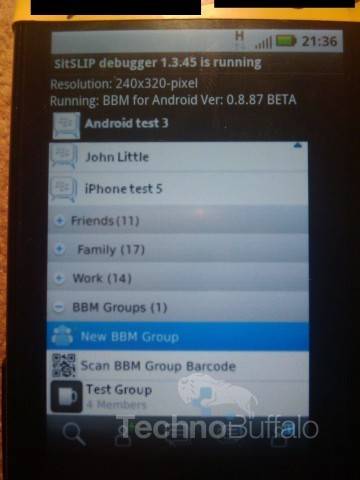 It’s been quite a while since we heard about good old BlackBerry Messenger on Android. The last we heard was that a test app from RIM was over in development over a year ago, and though RIM has grown closer to Android through its Playbook tablet, that doesn’t mean they’re any fonder. The rumor fell through in the months since. In any case, TechnoBuffalo has got a photo of what looks like BBM running on a Froyo or older device. Someone‘s trying out the idea, but there are a few warning bells to consider.

One: the device in the photos is cropped and covered, meaning that it probably isn’t retail hardware. Two: you can see virtual navigation buttons at the bottom of the screen – something that no retail Android device has. Assuming that the screen is real, that means the device is some kind of developer mule, created specifically for testing purposes. Three: the visual elements of the app itself are out of place and non-justified. This may be because porting resourced from a BlackBerry app to Android isn’t the best aesthetic move, or it may just be that someone’s playing around. In any case, these photos are not of an app that’s anywhere near completion.

One thing that everyone can agree on is that RIM isn’t doing well. Its share in the smartphone market is moving steadily towards single digits while Android and to a letter extent iOS gobble up its former customers. Many pundits have put forward the idea that RIM can survive by licensing its excellent BlackBerry email and messaging clients for use on other platforms, which would certainly include Android and iOS. The company isn’t giving up its ghost any time soon, but these continued rumors of an expanded BlackBerry messenger may be signs of a contingency plan.