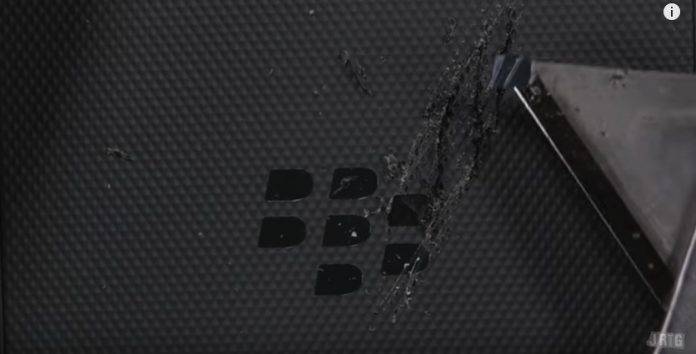 Trust Zac Nelson to let you know if a phone is durable enough as he meticulously tests a device by scratching, burning, and bending. Such reviews for build quality and durability are important because they tell the consumers if a device is worthy of their hard-earned money. Next on the spotlight is the BlackBerry DTEK50 which is said to be one of the World’s Most Secure Smartphones simply because it is from BlackBerry.

As usual, Mr. JerryRigEverything himself started with the Mohs Hardness Scale Test. This phone scratches at level 6 which is normal. Deeper scratch is at Level 7. This test tells us that the mid-range phone is at par with the premium phones in the market today.

What’s interesting is the speaker grill. Upon checking this part, Zac discovered that it’s just a sticker. Further scratching off the surface, the sticker comes off easily. It’s the same with the bottom grill at the front and back.

The back panel is a thick rubber layer. It’s like a basketball that can be scratched easily. It easily scratches but the material holds up very well.

The camera lens is made of glass. Most lens we’ve seen are plastic but this glass lens is scratch-resistant. That’s one advantage but it may shatter easily. Flash cover is plastic which is common for most smartphones.

The side and side buttons are made of metal, making the phone durable. The BlackBerry DTEK50 feels solid even after the bend test. You’ll only see a minor flex. It doesn’t bend or crack even from the screen side.

Upon heating the screen, the part of the LCD screen turned black after ten seconds but fully recovers. It’s still fully functional after going back to its original color.

The BlackBerry DTEK50 has passed the Scratch, Burn, and Bend Durability Test by Zac Nelson aka JerryRigEverything. He highly recommends the phone because of its security and robust build. Its only flaw is the speaker grill which is just a sticker. That’s something we could live with given it doesn’t affect the audio quality.