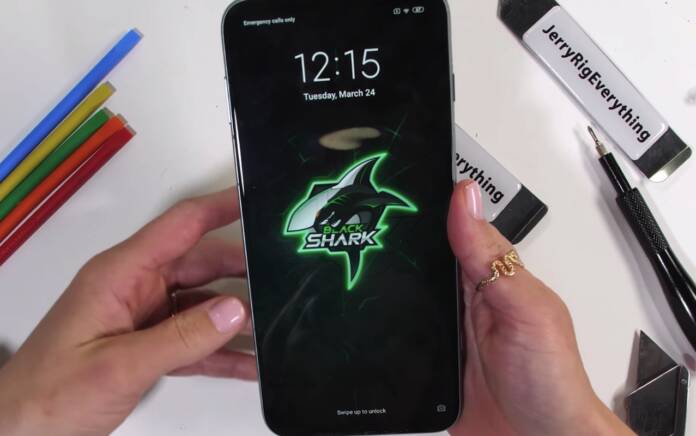 The Black Shark 3 Pro is Xiaomi’s third gaming phone under the Black Shark sub-brand. This is the first time Black Shark has introduced two phones at the same time but we’ll focus on the Pro variant. Yesterday, we saw the durability video where the smartphone passed a series of scratch, burn, and bend tests. Zack Nelson even showed us the Active cooling system that makes the Pro more impressive than ever. This time around, the gaming phone becomes the subject of a teardown analysis.

This particular teardown treatment is different because JerryRigEverything has a surprise for us. You won’t hear his voice but only his hands at the end of the video. Zack’s wife
Cambry Kaylor does the narration while opening the Black Shark 3 Pro herself.

As with most of Zack’s teardown videos, this one starts with some heat. We’ve always been curious as to how the Black Shark Pro 3’s components are laid out inside and the video reveals everything. But first, you need to remove the bow tie-shaped back panel.

Inside, we discover some large, thick copper heat pipes that make “cooling” more efficient. They are connected to some metal placed above the chipset. The design is a bit different from other smartphones.

If you want to go further, you need to access it from the other side. Remove the display panel first before you see the other parts. We see two batteries that can be charged simultaneously. It can be assumed this is to reach the 65W promise and make fast charging possible. The back panel is smaller compared to the display. It’s more angular this time.