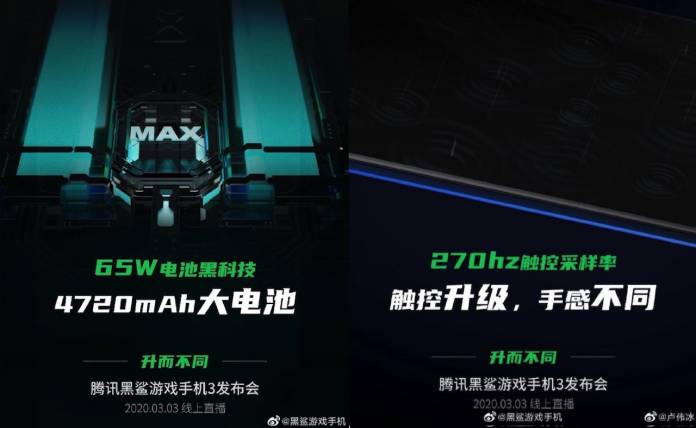 We won’t be surprised if Black Shark becomes a separate company like the POCO but for now, let’s focus on the next-gen gaming phone from Xiaomi. The Black Shark 3 has been teased to arrive with a 4720mAh battery with 65W fast flash charging. It can probably charge a 2780mAh batt within 15 minutes.

As for the launch date, we can expect a March 3 reveal via Livestream. There is no MWC 2020 but OEMs like Xiaomi and several other sub-brands are willing to make online announcements only.

The Black Shark 3 will use the latest Qualcomm Snapdragon 865 processor. Built-in storage will be UFS3.0 with Turbo Write and HPB technology. We’re thinking of an 8GB or 12GB LPDDR5 RAM.

Xiaomi is said to have made several optimizations to achieve extreme gaming performance. Black Shark also has its own GameEngine technology that helps in the overall hardware and software performance. Liquid cooling has also been considered here.

The Black Shark 3 is also said to arrive with 90Hz screen refresh rate + 270Hz touch sampling rate. Other improvements on specs and features are unknown but we believe they will make the Black Shark gaming phone more powerful than ever.