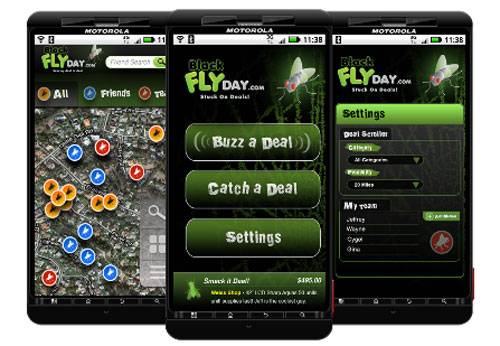 If you like shopping and have an Android phone we have one of the coolest apps for the holiday shopping season and it is called Black Flyday. The app is really cool and can provide shoppers with the best deals that can be found on products within a certain radius of the user. The app is offered for Android OS devices only and is available in English and Spanish versions.

The app is GPS enabled and users can post Black Friday deals for other shoppers nearby to find using the app and GPS location info. Black Flyday also integrated the users Facebook friends list and it features a real-time bulletin board for sharing deals as well.

Other features include a deal scrolling app that offers all of the deals nearby or those that are posted by friends using the app. The app is on the Android Market right now. It’s free for users on Black Friday, and if you want to keep using the app after that it costs $9.99.