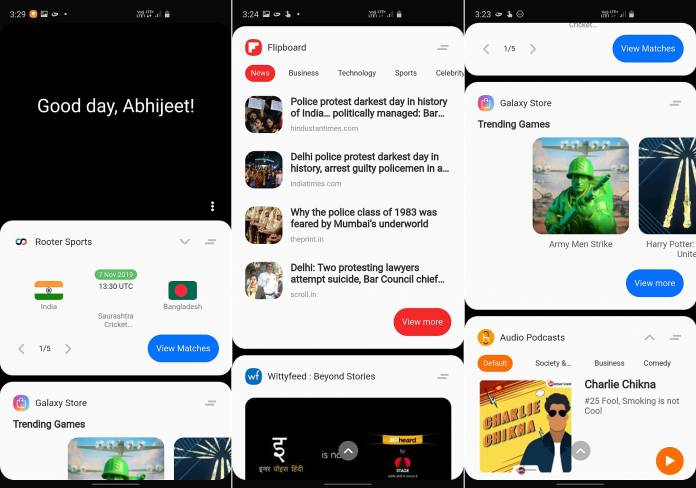 At the Samsung Developer Conference last month, one of the things they announced was that Samsung Daily will replace Bixby Home on your Galaxy devices as the official newsfeed app. They said that it will start rolling out in November and it looks like they’re sort of sticking to that schedule. Owners of the Galaxy S10 devices that are on the Android 10 beta can now update their Bixby Home and it will turn into Samsung Daily with a few minor tweaks but no changes to its core functionality.

According to SAM Mobile, Samsung released an update for the Android 10 beta and the main thing that it does is update your Bixby Home feature and bring you Samsung Daily when you swipe right from your home screen. You will still be able to get cards for news, sports, videos, games, music, and recipes. You’ll get some minor improvements in the interface, but nothing major has changed as it transitions to Samsung Daily. Some services that were previously included in Bixby Home like Uber and Foursquare have already been removed.

For now, only those that are enrolled in the Android 10 beta and have either a Galaxy S103, Galaxy S10, Galaxy S10+, or Galaxy S10 5G will get this update that transforms their Bixby Home to Samsung Daily. However, it’s not available on the Galaxy Note 10 even if you’re on Android 10 beta. We’ll probably see a wider release later this month or by December once the stable version of Android 10 gets released.

But if you meet the criteria mentioned above, go to the Galaxy Store and tap on the three-dot button on the right and go to My Page. Tap the Update button and look for an update to Bixby Home. Once you’ve finished downloading and installing, then you’ll see the “transformation”. You can also tap this link if you have Android 10 on Galaxy S10 sou can download directly from the App Store (you won’t see it if you don’t have the appropriate software and device.

Samsung Daily may also be available on Android Pie later on, but of course we expect it to roll out first in beta and later on the actual Android 10. So for now, enjoy your Bixby Home while you still can, although the update will not really make much difference.