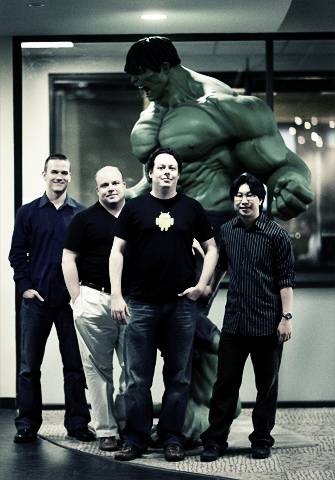 Android Community had an invite to spend some time with developers Big in Japan, the team behind GoCart which was one of the ten apps to win $275,000 in Google’s Android Developer Challenge.  Ewdison Then, our resident Linux expert, made the trip over to their Dallas offices to ask them about the motivation behind GoCart, why the team decided to focus on Android, and what most excites them about the platform and its future.

“Finally people are going to think of their phones as something more than a way to talk to their friends” Rylan Barnes, Big in Japan

GoCart is a mobile shopping comparison app, that uses the camera on an Android device to scan a product’s barcode. Once recognized, the app checks pricing for the product in online stores; however, it also uses GPS to find local stores and query their inventory, offering alternative places to shop if you’re not willing to wait for delivery. Alternatively, users can set a price band they’d be willing to pay, and choose to be alerted when the product drops to that price.

“The Android platform, being open, really creates a lot of opportunities for us, where you can decide what you want the phone to look like: is it a phone or an internet device? Really that line becomes blurred with the Android platform. With the iPhone platform, it’s a really closed environment that’s really neat – it’s a phone, and it does really neat things – but you have to play by Apple’s rules, and Apple’s rules say “right now, you can’t touch the camera”, the SDK doesn’t let you manipulate that. There’re all sorts of things that you can’t necessarily do with the iPhone platform” Alexander Muse, Big in Japan

In the interview, Ewdi and the Big in Japan team discuss Android versus Apple SDKs, how they see the platform benefiting from having Google behind it, and the problems an open-source, multi-device OS faces in trying to stand up to a more managed environment like the iPhone. They also touch on the possibility of carriers and device manufacturers creating their own custom Android builds, and what impact that could have on code development.

Our thanks again to the Big in Japan team for the invite.