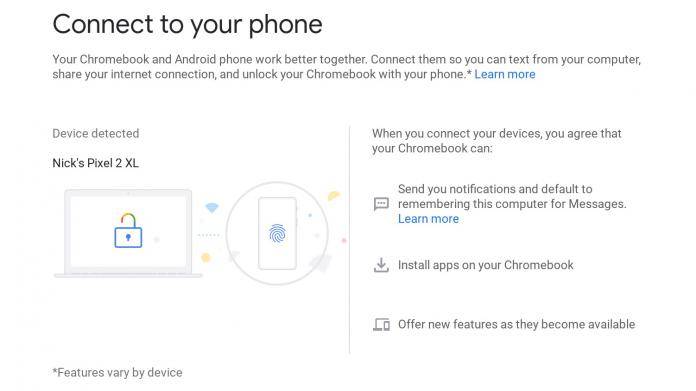 As Jack Johnson has always said, “We’re always better when we’re together.” That’s what Google is also thinking about when creating a feature that would make a user’s Chromebook and Android smartphone work together. That is why the rumored feature is called “Better Together”. We’ve been hearing about this for over a year now but it looks like we’ll finally be seeing it in action, at least if you’re part of the Chrome OS Dev channel as it is apparently now rolling out there.

Basically, the feature started out as a way for Android phone users to be able to respond to SMS messages on their Chromebook, in case it’s easier to type out responses on an actual keyboard or if they’re busy working there and can’t be bothered to pick up their phone to respond. But it looks like Google wants to also evolve it into a more “general purpose” kind of feature to connect your two devices together beyond just SMS.

If you have a supported version of Chrome OS, you’ll receive a notification saying that your devices “work even better together.” It then instructs you to “connect your Chromebook with your phone.” If you tap on it, it will then take you to the “Connected Devices” settings, which is obviously new for your device. There will be steps to follow in pairing your phone and once that’s done, you will see a Messages desktop client show up and give you SMS notifications on your Chromebook.

The Smart Lock feature which lets you unlock your Chromebook using your phone, has also been moved to the Connected Devices section. For now, there aren’t any new functionalities available for this feature but since they’ve made it available in the Dev channel, it’s probably a matter of time before we see new features introduced.

However, we don’t have a timeline yet as to when we’ll see Better Together on a stable channel. We’ll just have to get news from those in the Chrome OS Dev channel in the meanwhile.