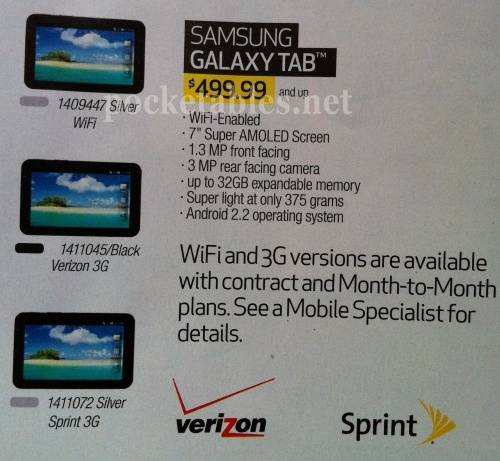 We’ve already seen leaks pointing to a November 14 release of the Sprint version of Samsung’s Galaxy Tab; now we have pricing for the 7-inch Froyo slate.  Pocketables spotted Best Buy listings of the Tab in both WiFi-only and 3G/WiFi versions for Sprint and Verizon, complete with the promise of a starting price of $499.99.

Both contract and month-to-month plans will be on offer.   It’s not clear which of the SKUs that lowest price applies to, at this stage, though since Verizon has already confirmed a $600 price for their month-to-month version, it depends on how much Sprint are willing to subsidize compared to how great an amount Samsung can shave off by leaving out 3G.