We’re a few hours into the official Google announcement but as always, there are last minute leaks and rumors. This time though, we’re almost certain about the tech giant’s lineup and then a Best Buy ad popped up on a Reddit thread, showing images of a Google Pixel 2 and a Google Home Mini. Nothing has been changed yet to what we know so far but we’ve got some confirmation about what to expect.

The flyer is for next week for a Quebec location as indicated on the post. It’s a Best Buy Canada promo that sells the Pixel 2 bundled with the new Google Home Mini. Details are scarce but the device is priced at 80 CAD (about $64). The phone is also confirmed to be available at Telus, Rogers, Bell, Fido, and Kudo. 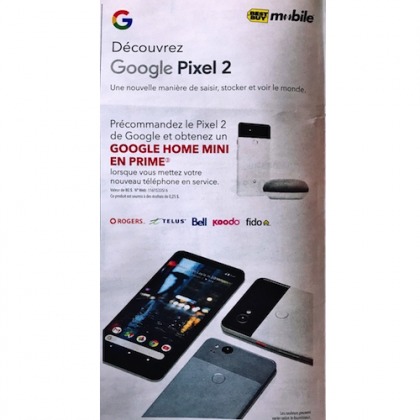 In this ad, Google describes the Pixel 2 as a new way to capture, store, and see the world. We’re assuming this will be more imaging-centric with the improved cameras.

It says in the ad that if you pre-order for the Pixel 2, you will receive a free Google Home Mini for free. You only need to activate with a participating carrier. The mobile and data plans will be announced separately in the coming weeks not only in Canada but also in other countries.