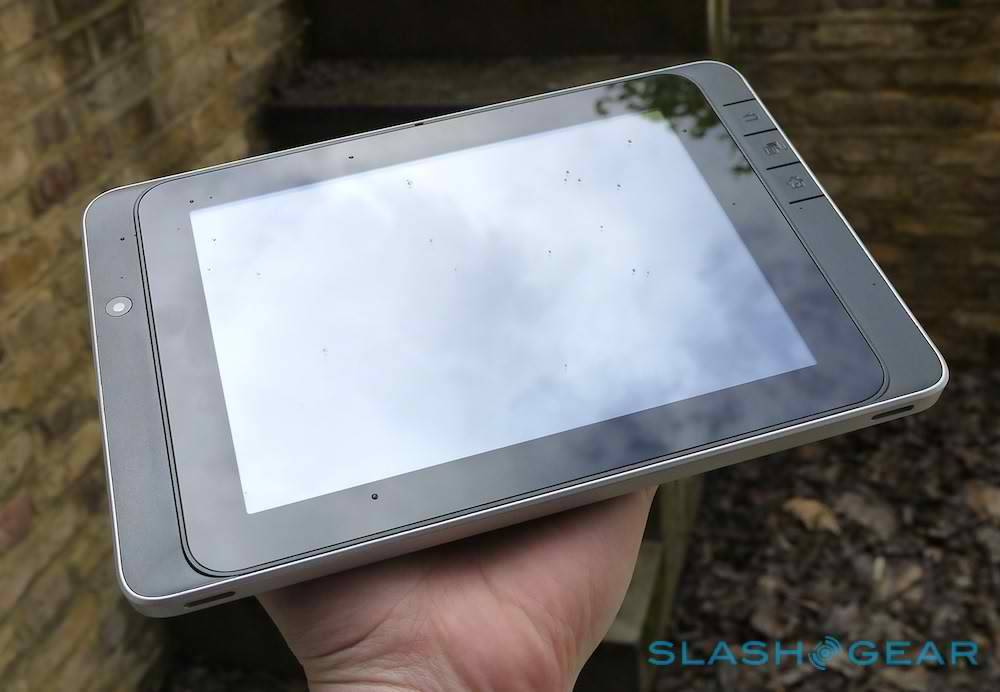 What we’ve got going here is a look at what Chris Davies has in his hands right this second, a low-cost Android tablet from some folks that normally make ereaders, BeBook. What the folks at BeBook have produced for the world now is a ereader-sized Android tablet for a relatively low price, making headway into the world of general Android tablet goodness with a rather simple looking piece of equipment that you might very well want to take a look at for your next (or first) tablet solution.

This device is about the size of your average medium-sized book, at 140 x 202 x 11 mm and weighing in at 426g. It’s constructed primarily of plastic and is both creak and flex-free – what it essentially ends up being is a solid device made of material that wont quite survive being hit with a hammer, if you know what I mean. On the back you’ll find a matte black slab of plastic with a poorly printed logo and an adhesive serial number label. 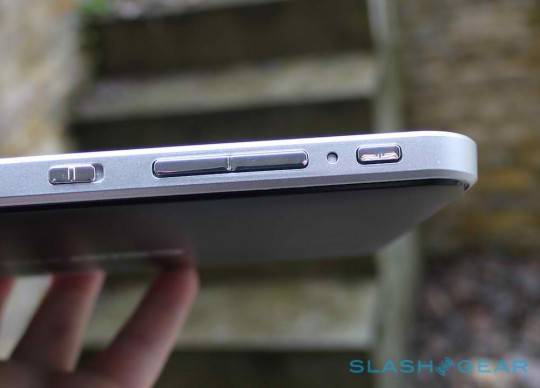 Controls include a power button, soft-reset button (rather unique, I must say,) volume keys, and screen-rotation lock all along the silver plastic edge. There’s a mini HDMI port, microSD and miniUSB ports along the side — it’s important to realize here that I just said miniUSB, not microUSB, so you’ll have to dig out your generations-old wires if you’re going to have some backups in your drawer. Also there’s no HDMI cable included in the box, so you’ll have to pick one up if you’ve not got one already. 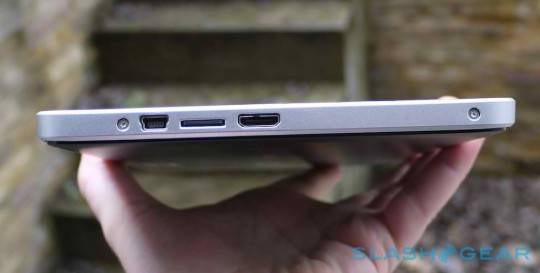 The display is a 7-inch 800 x 600 pixel resolution panel that’s a TFT LCD, all of this with poor viewing angles and a look that’s not quite as good as the now-ancient Galaxy Tab (original). If this tablet aims to be an ereader, it’s not going to fair too well. If you’re going to use this tablet for the most basic of functions, you’ll be in luck – sort of. The rest of the buttons on this device include three Android menu buttons along the front that include back, menu, and home, and there’s a single front-facing camera for your recording pleasure. It’s called 2-megapixels and struggles at that, but does say it’s set at 720p video recording, surprisingly. 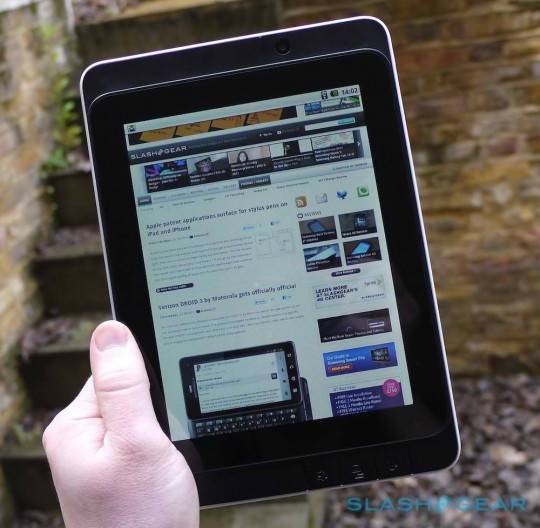 Inside you’ll find a 1GHz single-core Cortex-A8 processor, 512MB of RAM, 4GB of internal storage, and connections along Wi-Fi b/g/n and bluetooth – no 3G and no GPS. You’ll get an accelerometer though, a pair of low-class speakers and a 3.5mm headphone jack as well. 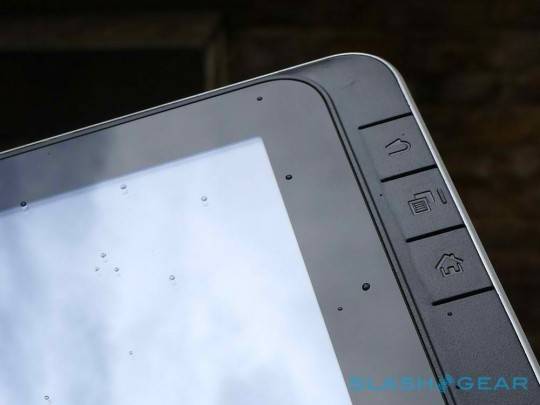 You’ll be rolling out with the ol’ Android 2.2.1 Froyo on this so-called tablet, the plus side of this being that it’s stock AND you’ve got access to the Android Market for apps. You’ve also got Gmail and Google Maps, a couple of apps that have been missing from quite a few “budget tablets” in recent months. The only differences inside the tablet you’ll see between stock Froyo and this situation are a few non-standard apps: Ebuddy multi-service IM client, Tank Hero, Angry Birds and Egg Savior games, Rockplayer, ES explorer and ES taskmanager for handling files, and both FBReader and Aldiko ebook reader. 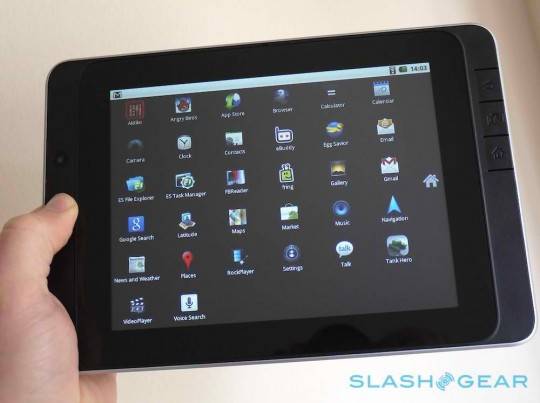 For those of you new to Android and wishing for an easy-to-work and access ereader, this may prove to be a bit troublesome if you’re comparing it to, say, the NOOK, the NOOKcolor, Kindle, or essentially any other ereader-centric tablet. What this device will do for you though is play some sweet videos. Flash video is stutter-free in the stock browser, you’ll be able to roll out with some MPEG4 video clips if you can plop em into the tablet on your own, 1080p included, but there are quite a few everyday file types you’ll have to stay away from: MPEG4 works, everything else is essentially out. And what about that HDMI port? It works rather well, so as Davies notes here again, it’s a shame they didn’t include a cord in the package.

Less than a day at medium use, with less than three days sitting around with no use at all. This compared with essentially any competitor, leaving out the masters of batteries, those being the original Galaxy Tab, iPad 2, Galaxy Tab 10.1, G-Slate, Acer Iconia Tab A500, etc etc… essentially the battery isn’t great by any measure. There is the relatively OK charging time, on the other hand, that being 2-3 hours for a full charge. 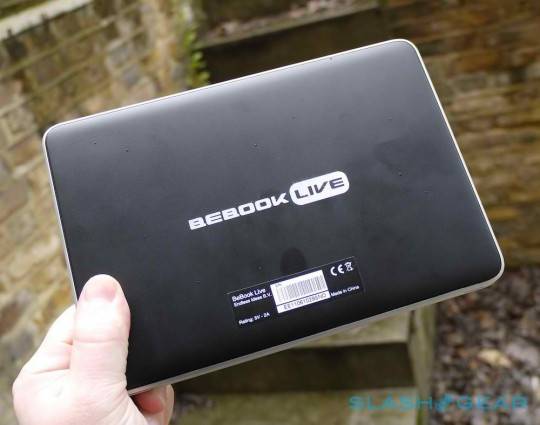 This is no rival tablet. You’ll not be wanting to choose this device over basically any other tablet save for one point: it may well be the cheapest tablet you can purchase that still uses an OK version of Android on a 1GHz processor. That said, the original Galaxy Tab retails for only £30 more than the price of the BeBook and offers dual cameras, a higher resolution screen, four-times the internal storage and stronger battery life. Harsh! Currently you’ll be picking up the BeBook Live for approximately £229 in the UK, translating that how you will to USD or whatever sort of money you might be using at the time. If BeBook can somehow reduce the price significantly, they may well have a simple tablet winner on their hands – at the moment though, expect this device to be sitting on the shelves for some time.

You can see an extended review of this tablet on SlashGear.