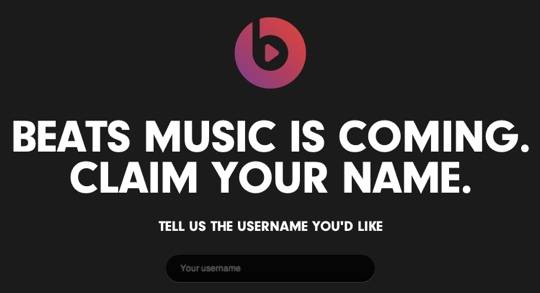 There has been plenty of talk about a streaming music service from Beats, and well, it looks like the teaser page has gone live this morning. The service has been dubbed Beats Music and is expected to go live next month, in January 2014. Speculation suggests we will see an announcement during CES, but for now, that has yet to be confirmed.

While there are some details we still need to learn, Beats Music CEO Ian Rogers did share some facts. Coming by way of his Fistfulayen blog, he made it clear that “Beats Music is real.” Other details coming from Rogers included the following;

As mentioned, the teaser page has gone live at beatsmusic.com. Perhaps key with that, the site is open for name reservations. There isn’t much involved in the process, basically, you enter your desired username and assuming it is available — you will need to follow-up with a few slightly more personal details. Those include your name, email address and telephone number.

One interesting aspect here, it appears as if some of the specifics are still being worked on and improved. In you notice in the above list of facts from Rogers, he mentioned they have given a few artists and other influencers access and are improving based on their feedback. Otherwise, aside from Rogers, we have previously learned that Trent Reznor of Nine Inch Nails fame would be serving as Chief Creative Officer.

Anyway, those looking for a bit of a history on the Beats streaming service should dive into the Story Timeline sitting below. But that aside, if you are interested in checking it out once live, you may want to register your interest (username) sooner rather than later.