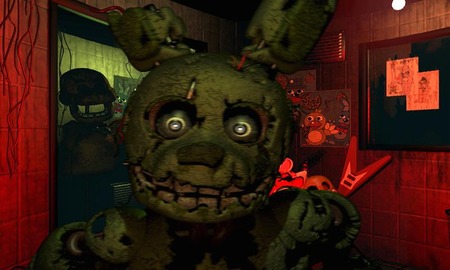 If you enjoy scary mobile games that will make you pee in your pants, then you’re probably a fan of the Five Nights at Freddy’s game series. Who knew that just looking at the surveillance cameras after hours in a haunted pizza joint with homicidal animatronic animals running around can be such a nightmare? Well, now the game has a new chapter and it’s another doozy.

Five Nights at Freddy’s 3 is actually set thirty years after Freddy’s Fazbear Pizza’s shut down (finally, after probably hundreds of digital deaths at the hands of those scary creatures). Someone thought it was a great idea to create a theme park ride because nothing spells like fun than an abandoned restaurant that used to be ruled by furry killing machines. Your role in this game, is, surprise surprise, a security guard that needs to watch over the place through CCTV cameras.

But all the previous animatronic freaky characters from the previous games are long dead, but their presence is still felt because now they’re ghosts roaming around! They’re non-lethal ghosts, but still have the power to scare the crap out of you. And this time around, you only have to deal with just freaky-looking bear called Springtrap, but even just one is already enough. The game of course has other easter eggs, secret bonuses, and hidden endings, but you might not be up to exploring the place as you’re busy running from this creature.

You need to spend $3.99 to scare yourself to death by buying the game from the Google Play Store. There’s a free demo version to see if you can actually take it before committing yourself to become the guard at Freddy’s.