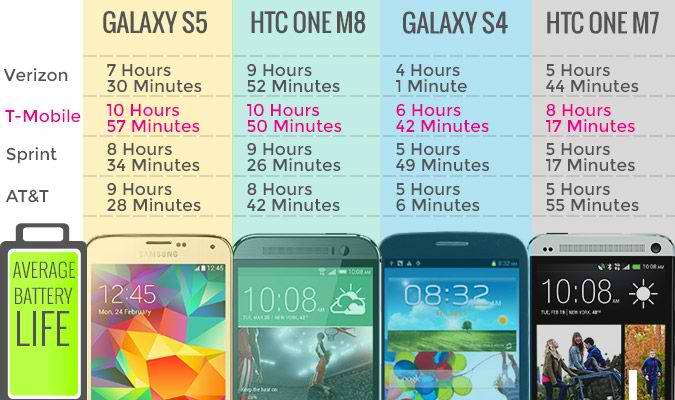 Mirror, mirror on the wall, who’s got the longest battery life of them all? When it comes to Android devices of the Top 4 carriers in the US, the winner seems to be T-Mobile. The test was conducted using the Android app Laptop Mag Battery Test and used four smartphones from Samsung and HTC, one each from the top carriers. The conclusion is that the devices from T-Mobile have the longest average battery life among all those tested.

The four phones involved in the test are the Samsung Galaxy S5, Samsung Galaxy S4, HTC One M7, and HTC One M8. Each phone, using the app, went through 50 popular websites and stayed for 60 seconds each site, until the batteries ran out. The WiFi was turned off so that the smartphones had to solely depend on the carrier’s network. Bluetooth and NFC were also turned off, and all phones were set at 150 nits for brightness, to be fair to all gadgets involved. They also tried to make sure that each phone had at least 3 bars of service from their carrier.

For all four smartphones, T-Mobile was way ahead of its competitors, with most of them lasting an hour (or more) less. For example, with the Samsung Galaxy S5, the T-Mobile phone lasted for about 10:57 hours, which was an hour longer than AT&T which was at 9:28 and Verizon was way below at 7:30. The same was also true for the other three devices. This has been going on for the past 3 years, and in just the past 12 months, T-Mobile devices had an average of 8 hours 11 minutes, while all the other 3 had an average of one hour less.

What is T-Mobile doing to “prolong” the battery life of their smartphones? Their official statement is that they work with the OEMs to identify which of the functions have the largest effect on battery life and then they “reduce the background process that impacts overall performance.” (whatever that means exactly). It could also be that their network has a more efficient process of sending and receiving data. Another reason may be they have less users on their LTE Network, but of course that is something they would not want to brag about.