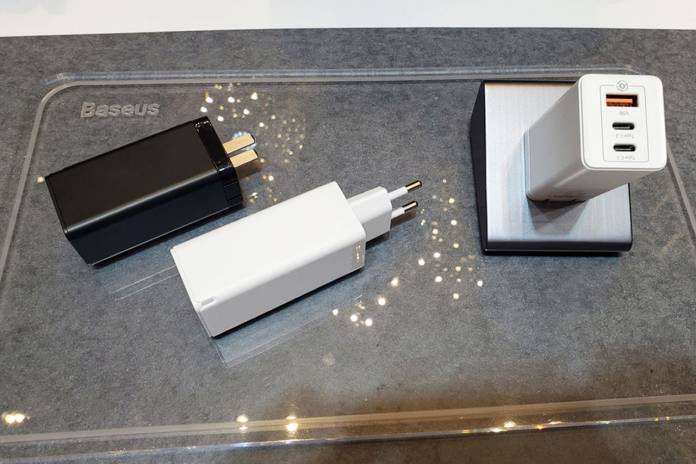 In this age where every person has multiple devices on hand, having chargers that have multiple ports is now a necessity and not just a sort of luxury. One recent development in chargers has been Gallium nitride or GaN chargers and now accessory company Baseus is releasing a GaN-based charger with two USB-C ports and one USB-A port. The Baseus 65W 2C1A multiport GaN charger carries around up to 65W of power and it can still fit in the palm of your hand.

The brick charger is probably one of the most versatile of the GaN chargers around. You can have up to 65W of power on a single USB-C and a 45W and 18W split between either the two USB-C or the USB-C and a USB-A port. But what’s even better is that it is shaped in a longer stick shape rather than the usual brick so that if you’re using it on a power strip, it won’t block off the other brick chargers beside it.

The GanFast solution enables high wattage in an ultra-compact form factor and so it’s with this Baseus charger that it makes its debut as a multiport charger. GaN chargers offer higher efficiency, higher thermal conductivity, higher temperature resistance, and better material than the usual silicone we’re used to. It reduces the size and at the same time boosts the efficiency of a charger.

Unfortunately for the rest of the world, the Baseus GaN charger will only be available in China when it comes out this September. But with the way that GaN chargers are going, we’re probably going to see something similar that will be available globally soon.

Meanwhile, if you’re in China, you’ll be able to purchase the Baseus 65W 2C1A multiport GaN charger sometime in September. There’s no announcement yet as to the exact date and also the price point.