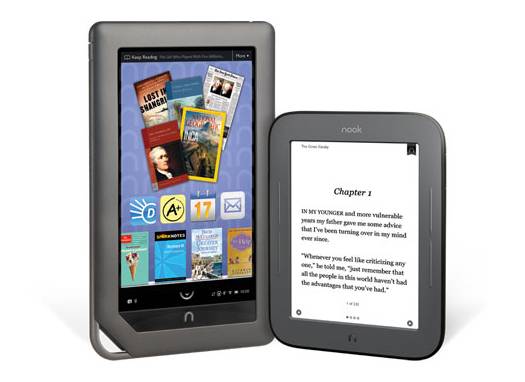 Barnes & Noble is making a new Android-based Nook e-reader! Huzzah! The latter isn’t exactly news – there’s always a successor to the current model in the pipeline. But according to an in-depth report in The New York Times, the bookseller is preparing a new model of the Nook for release some time this spring. Executives, blissfully anonymous, were noted in the multi-page analysis of the current e-reader market. The new Nook was described as a “fifth device”, implying that it’s not a refresh or retread of the Nook Color, Nook Tablet or standard e-ink models.

The question in that case is, where does Barnes & Noble go from here? They’ve got every price point from just south of $100 to $250 covered, and anything larger than the current Nook Color and Nook Tablet definitely falls into the more premium tablet range. Extending the range in either direction is possible: a large 9-10-inch tablet would compete directly with the iPad and more expensive premium Android tablets, not to mention the rumored expansion of B&N’s primary competitor. But a real boon would be an even cheaper reader. Imagine how many impulse buys a $50 e-ink Nook would rack up, each one making back any losses with sales in Nook bookstore.

It’s all good to us – B&N has used Android-based software since the very first Nook, and it’s made the family of e-readers a favorite among modders. Modders aren’t exactly in favor at the company, however: a series of updates to the flagship Nook Tablet model has made rooting and custom ROMs extremely difficult for would-be budget flashers. An easy solution for all current Nook Tablet software has been reached, but it’s always just one more update from Barnes & Noble that tends to muck things up.