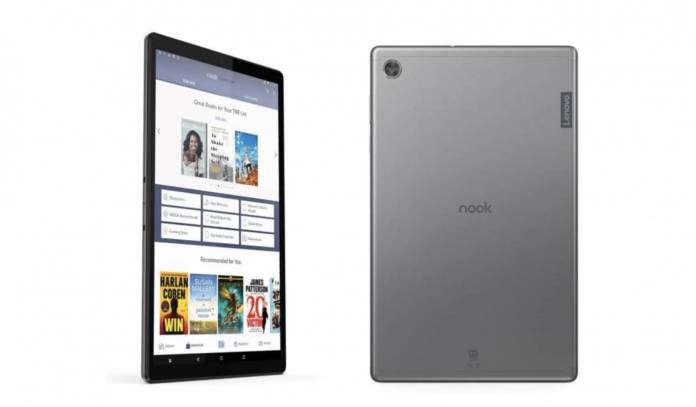 As rumored last week, Barnes & Noble is not giving up on its Nook line of e-readers/tablets and now we have confirmation of their new device. They announced a new Lenovo-made Nook 10″ HD tablet, the first collaboration between the OEM and the retail bookseller. It is an improvement over the last device that they released back in 2018, the Nook 10.1″ tablet. The good news is that it’s still a budget device at just $129.99, the same price as its predecessor.

The Lenovo-designed Nook tablet looks pretty good for a budget tablet, with its square-off edges and aluminum back that is more modern and stylish than the last Nook tablet. It has a full metal body and 85% screen-to-body ratio but it is also lightweight at 420 grams and can fit comfortably in your hands since its original function is for you to read ebooks. But it’s being marketed as a multimedia hub with its 10.1″ 1080p HD IPS display “for responsive touch and browsing”.

It runs on an unnamed 2.3GHz octa-core processor and has 32GB of storage that is expandable through a microSD card. And just like previous tablets, it will indeed be a full featured Lenovo Android tablet although they did not specify which version it will come out of the box. It also has better battery life than the 2018 Nook as it can last up to 10 hours of web browsing on a single charge. It also has front and rear cameras as well as dual audio speakers by Dolby Atmos.

Aside from the ebooks that you can buy through Barnes & Noble, you can also get access to digital newspapers and magazines, support for Google Play and Google Assistant, Kids Space from Google, which is a new mode that has apps, books, and videos for kids, and even an FM radio. The display also comes with TÜV Rheinland®-certified eye protection that protects your eyes from harmful blue light, or at least lowers the harm to your eyes.

The Nook 10″ HD Tablet Designed by Lenovo will be available starting early April 2021 at stores and barnesandnoble.com. It costs only $129.99, similar to the price of the 2018 Nook tablet.