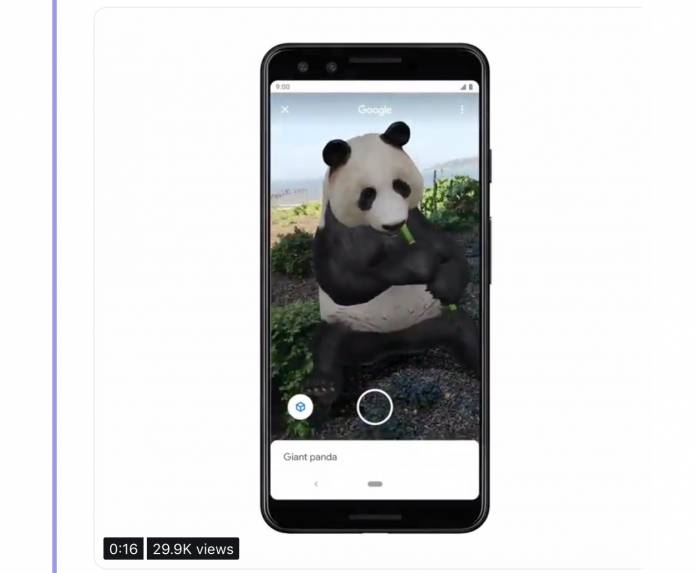 Have you ever dreamed of having a tiger in your living room, preferably one that won’t eat you? Well, the next best thing would probably be to have an augmented reality version of this animal that you can see on your smartphone. Google promised us something like that earlier this year at the I/O conference when talking about AR features coming to mobile search. Now they’ve announced that previewing animals through AR is now available on AR-enabled smartphones.

Google believes that AR is one of the tools that can be used to “wrap your head around new information”. If you want to teach kids about these animals “up close” or you just want to have a cute AR dog running around in your room, you will be able to do so now on Google Search through the Knowledge Panel, as long as your phone supports the AR Core platform that Google is using.

For example, you want to see a tiger. Just search for it on your Google app and in the results, you’ll see a card saying “Meet a life-sized tiger up close”. You’ll see a button under it that says “View in 3D” and by tapping on that and then the “View in your space” button, you’ll have the AR tiger there with you through your phone in a Google Lens type of view. There may even be sound effects as you spin and zoom on the animal. If you want a full-screen experience, you’ll have to tap anywhere to remove the controls.

Currently, the Google Search AR animals that you can interact with include lions, bears, alpine goats, timberwolves, emperor penguins, giant pandas, Rottweilers, etc. There are some AR creatures that will do additional actions, like the panda eating a piece of bamboo or the Rottweiler scratching itself (without shedding actual skin).

According to 9 to 5 Google, Google will also be partnering with brands like NASA, New Balance, Target, Volvo, and even competitor Samsung, to bring more third-party AR content in the future. We’ll keep you updated as to what you’ll be able to see soon.