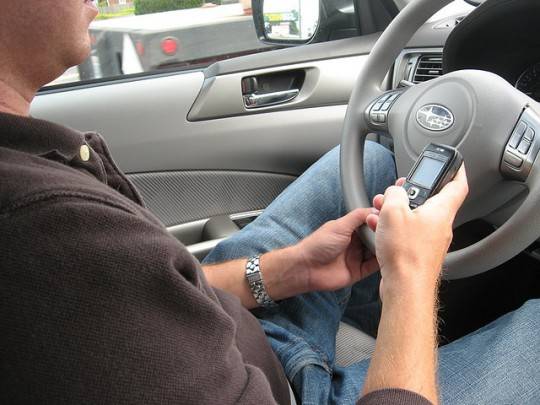 While we have seen campaigns against texting while driving from several of the US based mobile carriers, it looks like the four main carriers will soon be coming together under one slogan. That slogan should sound familiar to many as it is already existing. Basically, Verizon Wireless, T-Mobile and Sprint will unite with AT&T under the It Can Wait platform. The four carriers will be joined by 200 other organizations and the campaign will begin showing in television and radio commercials this summer.

The message will also be taking to the air, literally. AT&T will have the It Can Wait campaign flying in the sky on the Goodyear blimps. Additionally, the message will also be on display at carrier stores as well as at various community events, on social media and at a national tour that will include a driving simulator. Simply put, it looks like it will soon be hard to ignore the “It Can Wait” campaign.

The interesting take here, while it is hard to argue that any distraction could increase your chances of getting in an accident — not all seem convinced that texting while driving is all that bad. This thought comes from a 2009 government study where they found that cellphone usage was a factor in just one percent of crashes. The other side of that argument is how cellphone usage is only increasing with time. Another point to consider here, if a phone is not in the hands of the driver when the police arrive, that possibility could also be overlooked.

Putting that aside, AT&T seems convinced that using a mobile phone while driving is dangerous. AT&T has referred to this as being an “epidemic” and CEO Randall Stephenson has said that “texting while driving is a deadly habit that makes you 23 times more likely to be involved in a crash.” Other comments from Stephenson touched on the four carriers coming together.

“I think we all understand that pooling our resources with one consistent message is a lot more powerful than all four of us having different messages and going different directions.”

At present the combined It Can Wait campaign will begin this summer and is planned to run through September. While we aren’t expecting AT&T to drop the campaign completely after September, the support from the other carriers remains to be seen. AT&T’s Randall Stephenson did however suggest that it could continue if the partners are in agreement.