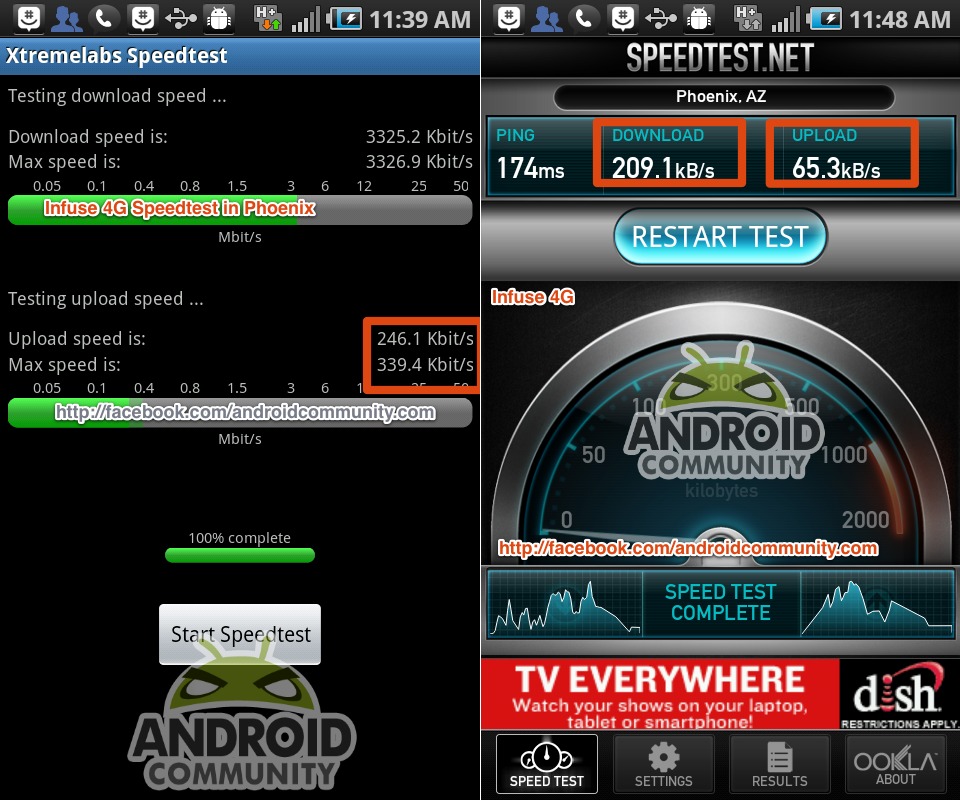 AT&T has been in an ongoing battle with users and blogs over the upload speeds on recent android phones. Who do we blame for it AT&T, Speedtest.net, or Both? You might remember all the talk the Atrix 4G got when it launched as a 4G phone, then users all learned 4G upload speeds were currently disabled. AT&T even responded to the complaints. We have done a little digging and have some interesting results regarding AT&T, and Speedtest.net for you all to enjoy below.

Above you can see an image of the Infuse 4G from AT&T both running some speedtests only a few minutes apart. On the left you have XtremeLabs Speedtest and Speedtest.net on the right. Are you seeing that right, or are we crazy. Speedtest.net must really hate AT&T because we have ran these tests time and time again and things are always faster with XtremeLabs. Oh and the Infuse 4G recently got a OTA update to fix the upload speeds, the fix gave about a 15kb increase and that is basically not even worth the news. See our hands-on here.

So what is going on, that update didn’t seem to help anything, and neither does speedtest.net and the inaccurate results or whatever you want to call them. We have tested this on more than one AT&T device, and they all seem to perform pretty poorly not only on upload speeds in general, but in speedtest.net as well. Next I have some screenshots of the Samsung Galaxy S II unlocked and running on AT&T, I mentioned we tested on more than one device. It also gets just outright terrible results on speedtest.net 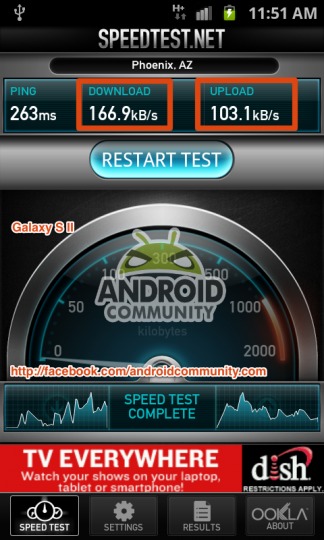 Above you see the results of the Galaxy S II speedtest.net results running on AT&T also, and clearly those results are sloooow. The Galaxy S II is much, much faster than that on any network, but again it gets extremely slow upload speeds. I thought AT&T had addressed the upload speeds issue, but apparently not. It looks like they are still trying to steer around the fact that they are not allowing people much, and are severely still capping upload speeds. The Infuse, and Atrix updated barely made a difference for users.

Why do I say that AT&T is still severely capping upload speeds, because we have some proof. I mentioned we had an unlocked Galaxy S II running on AT&T right. Well it is not tied down with AT&T’s software and OTA updates that seem to be limiting those on AT&T. It gets blazing fast download, and upload speeds as long as we don’t use speedtest.net. Our next screenshot is the Galaxy S II unlocked on AT&T using XtremeLabs for our download/upload testing, and what do we get– 4100 kb/s download and 2500 kb/s upload. 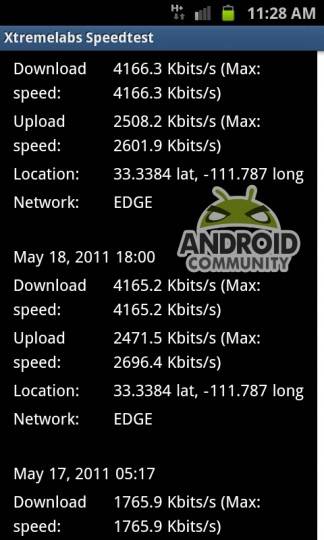 You can clearly see the difference, not only are scores extremely low on speedtest.net, but even when compared to the Infuse 4G with XtremeLabs the Galaxy S II is just blazing, and i mean blaaazing fast. Obviously speedtest.net is either highly inaccurate, or they hate AT&T because I don’t get hugely different numbers like that on my T-Mobile devices. So who is to blame? This must mean that it is AT&T. Two phones both from Samsung running on AT&T 4G. The Infuse 4G gets dead slow speeds most likely because AT&T is still capping data way more than we would expect them to, especially upload speeds. Do you see those upload results from the Galasy S II? It got around 2500 kb/s consistently. That sure beats 246 kb/s and maybe 350 kb/s (if your lucky) that the Infuse and Atrix seem to be getting.

I don’t want to rip on AT&T to much, or speedtest.net for that matter, but what is up with the huge differences. Clearly the Galaxy S II being unlocked is not being capped by AT&T and because of it being free of their caps it is able to pull in some fairly solid numbers. Basically what we are getting at is blame AT&T. They are still capping data in huge numbers. Obviously all carriers have caps to even the network load and things of that sort, but this just looks ridiculous to me. AT&T needs to address this fully, and soon.