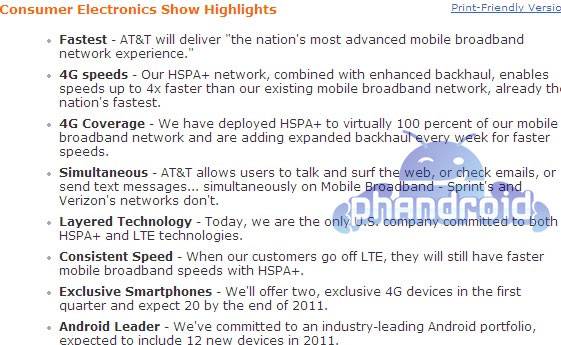 SO we’ve just received an image stamped with the mark of our pals over at Phandroid, an image that appears to detail the future of AT&T through 2011. This sheet notes that AT&T is the fastest network, that their HSPA+ network blasts content out at 4x the speed of the networks they’ve already got in place, that this HSPA+ aka 4G network will be deployed to “virtually” 100% of their networks through this year, that AT&T allows for talk and data simultaneously while Sprint and Verizon don’t, that AT&T is the only HSPA+ AND LTE committed US company, that even when customers go off of LTE they’ll still have faster mobile broadband speeds with HSPA+, and something fantastic that matters more than all of this. Actually three things, if you think about it. What three things, you ask?