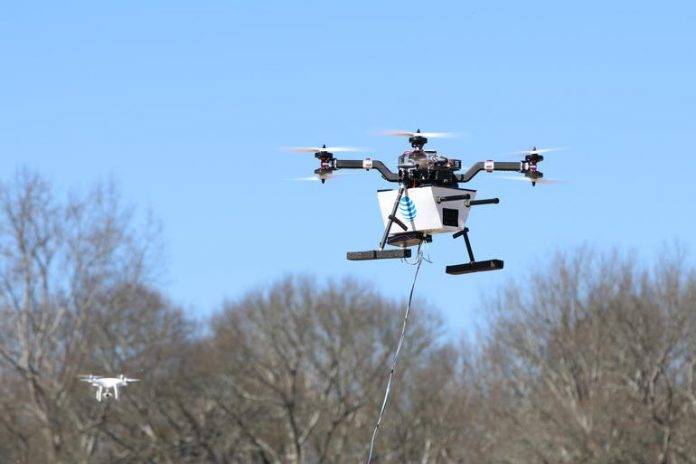 They still have a long way to go, but AT&T has taken one step towards creating a fully functional LTE drone to bring emergency connectivity to their users. The drones, which will serve as temporary LTE towers, were able to go on short flights and actually provide Internet to those who were testing it, but there are still a lot of issues and problems to overcome before the carrier will be able to have something that the public can benefit from.

AT&T was able to make some COWS fly during their test runs last week. Okay, not the animals obviously, but that is what they call the LTE-carryung drones. Cell-On-Wings is the official name of the drones. They are targeting that one drone can cover up to 40 square miles and be of use for areas that have a network dead-spot or when emergency connections are needed. The tests were conducted around Atlanta and the results show that there is future potential with this technology.

However, the drones were only able to fly up to 100 feet and their maximum flying time was just 10-15 minutes, which will probably not be that useful as it stands. Another issue that they may face is that the Federal Aviation Authority (FAA) only allows drones to fly as high as 400 feet. They also require a human pilot to be on standby in case there’s an emergency. Also, drones are only allowed to fly during daytime.

Hopefully, AT&T will be able to work around these rules as they continue to test the technology. And if one day, it does fly (pun intended), then this may be a game-changer for emergencies and even events like concerts, fun runs, etc.