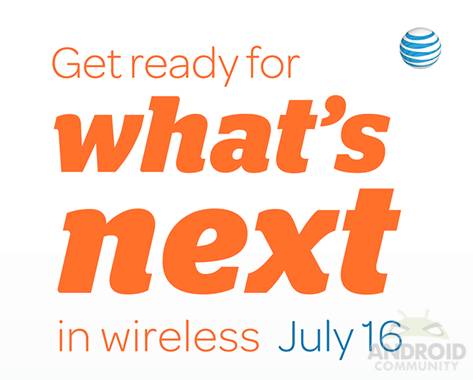 The folks from AT&T have something up their sleeve for later this month, and they’ve just started sending out press invites and teaser images telling us to “get ready for what’s next in wireless.” Stating that we’ll learn all the details on July 16th, but that’s all they had to share. The invite has just hit our inbox this afternoon.

AT&T confirms that they have some really big news coming on July 16th, and we’ll want to stay tuned. And that’s all we have to go on folks. The invite goes on to mention “what’s next in wireless” which leads us to believe this is not hardware based, and instead will be all about AT&T and their network.

They’ve been extremely busy rolling out and improving their wide reaching 4G LTE network, and it’s blazing fast to say the least. Expanding to other markets every other week or so, they might be ready to announce they’ve reached their rollout goal for 2013 a few months early. That’s just a guess though.

The invite talks about AT&T having the fastest 4G LTE network, mentions getting awarded the highest overall carrier performance, and even mentions higher overall average data speeds compared to all other carriers. So while we could be seeing the HTC One Mini, that rumored HTC One MAXX, or something else, this will likely be all about the carrier.

AT&T could announce upgrades to their network, the details on their LTE-Advanced network for next year, or even VoIP. We’ll have to see come July 16th. What do you guys think?