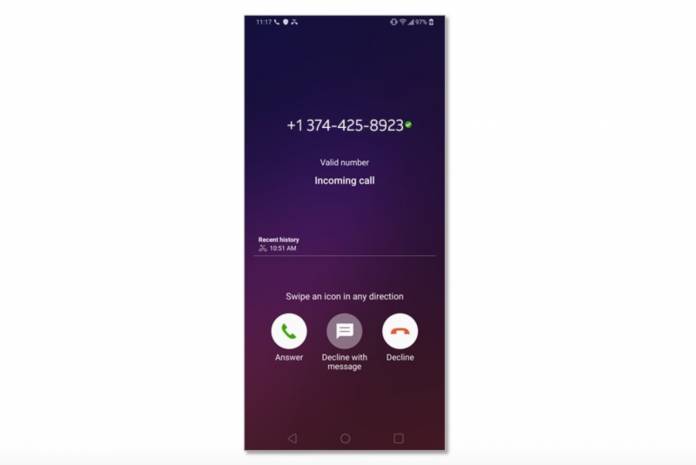 When carriers started announcing that they were joining forces to implement the SHAKEN/STIR standards to help fight robocalls and spam calls, consumers couldn’t wait to see what this will look like practically. We’re now seeing some of the fruits of this labor and AT&T is the latest one to show call validation for incoming calls on selected devices. If they have determined that the call is from a valid number, you will now see a green checkmark beside the number along with the words “Valid Number”.

Unfortunately, this call validation display will only be available for now for the following devices: Samsung Galaxy S10, Samsung Galaxy S10+, and the LG V40 ThinQ. If you’re also a subscriber with the AT&T Phone digital home phone service, you will also see the symbol “V” that represents it’s a valid number. This is not just part of the SHAKEN/STIR protocol that is being adopted by the industry but also the AT&T Call Protect Service, which is now free for all subscribers.

AT&T also shared some reminders about robocalls. While you will probably just answer calls with the green checkmarks, not all networks have implemented the protocol so some “unvalidated” numbers may actually still be legitimate calls you need to take. In the same way, while a valid number display tells you the number has been verified, it doesn’t always mean the person on the other side of the line is legitimate. So as with all things, users still need to exercise caution.

To make sure that call validation is available on your supported device, update to the latest software version of your phone. But you can also just download the AT&T Call Protect app or go to your account settings in myAT&T and turn it on. They will also be rolling this out to other devices soon but they did not specify which ones and what’s the timetable for this. We can probably expect the next wave early next year.

We look forward to more carriers finally implementing the protocols. And while this will probably not totally eliminate those pesky robocalls and scammers, at least you get an added layer of protection across all the networks.