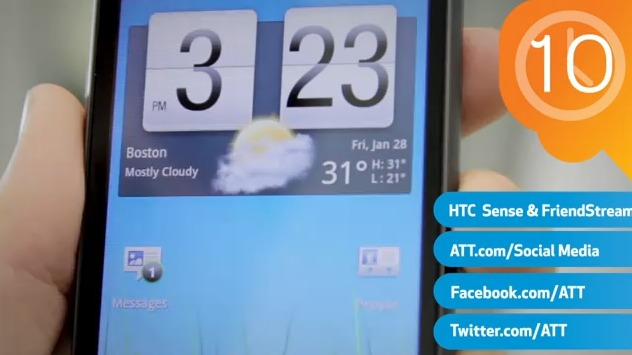 Today AT&T has announced that select smartphone customers will be able to switch their phones over to mobile hotspot mode, allowing all the devices within range the ability to connect to the internet on the same data plan. This feature will first be available February 13th, starting with the launch of the HTC Inspire 4G. Customers will be able to purchase the phone with an “AT&T Data Pro” plan which includes a total of 4GB for $45 a month.

If you’re already a customer by the time February 13th rolls around, you’ll automatically have an added 2GB of monthly data usage available to you at no extra charge. You’ll be charged the same $20 monthly fee you’ve already got, but you’ll receive an extra 2GB of data each month.

• Connectivity for multiple wireless devices to AT&T’s mobile broadband network
• 2 GB of data usage for $20 a month, bundled with AT&T’s Data Pro plan ($25 / 2GB)
• The combined AT&T Data Pro plus AT&T Mobile Hotspot will provide 4GB for $45 per month
• 4GB applies to collective use among all devices
• Overage fee of $10 per gigabyte

Having had the option to have a mobile hotspot on phones (from Verizon and US Cellular for some time now,) it seems odd whenever there’s a phone without the same capability sliding across ones desk. Conversely, the same is true about Verizon’s inability to have talk and data at the same time. What a weird, picky future we live in. Check out the full press release below:

Application Provides Additional 2GB of Data, Bundled with AT&T Data Pro
DALLAS, Feb. 2, 2011 /PRNewswire/ — AT&T* today announced select smartphone customers will soon be able to connect multiple devices from their smartphone – via Wi-Fi – thanks to the new AT&T Mobile Hotspot application. The feature will first be available February 13, beginning with the in-store launch of the HTC Inspire™ 4G. Bundled with the AT&T Data Pro plan, customers will benefit from a total of 4GB for $45 per month.

In addition, also on February 13th, to bring AT&T’s smartphone tethering plan in line with the AT&T Mobile Hotspot offer, AT&T will automatically add the additional 2GB of monthly data usage to smartphone customers already on a tethering plan – at no extra charge. Customers will incur the same $20 monthly fee they’re accustomed to paying, only now they’ll receive an extra 2GB of data each month.

AT&T Mobile Hotspot details include:
Connectivity for multiple wireless devices to AT&T’s mobile broadband network
2 GB of data usage for $20 a month, bundled with AT&T’s Data Pro plan ($25 / 2GB)
The combined AT&T Data Pro plus AT&T Mobile Hotspot will provide 4GB for $45 per month
4GB applies to collective use among all devices
Overage fee of $10 per gigabyte

“Our customers want to connect as many devices as possible to the nation’s fastest mobile broadband network, which is getting faster with 4G,” said David Christopher, chief marketing officer, AT&T Mobility and Consumer Markets.

“We want to extend the benefits of an additional 2GB to smartphone customers on our tethering plan. This delivers more value today for the price they’re already paying – and that’s what our customers want.”
Customers will receive a text message from AT&T – as soon as February 13 – once the additional 2GB has been auto-added to their plan.
*AT&T products and services are provided or offered by subsidiaries and affiliates of AT&T Inc. under the AT&T brand and not by AT&T Inc.
4G speeds delivered by HSPA+ with enhanced backhaul. Available in limited areas. Availability increasing with ongoing backhaul deployment. Learn more at att.com/network