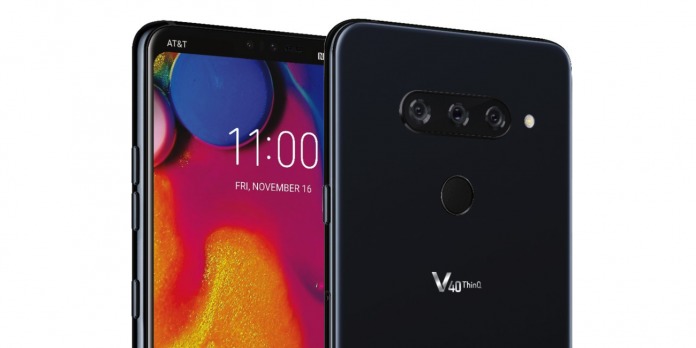 The official launch of the LG V40 ThinQ is happening very soon. We already told you it’s going to be insane for several reasons. It’s been under development and LG is on the final stages of testing before the public announcement. We’ve seen leaked images, renders, and a 360-degree video of the phone due next month. The phone has also hit the FCC so we know it’s almost ready with a similar design but we’re still interested to know how this will be different from the LG G7.

LG is cutting down on targets as part of its new business strategy. We’re crossing our fingers all of LG’s efforts will pay off soon. And judging by this new image shared by Master Leakster Evan Blass, we can see the LG V40 ThinQ has big potential with its triple camera setup and notched display.

Okay. So the notch doesn’t look too obvious but it’s there, just hidden. See that darker part on the upper left part of the screen where the AT&T icon is placed? That’s the notch.

This isn’t any rendered image but the photo appears to be an official one from LG. The other South Korean tech giant is scheduled to present something on the 3rd of October so we’ll confirm everything we know then.