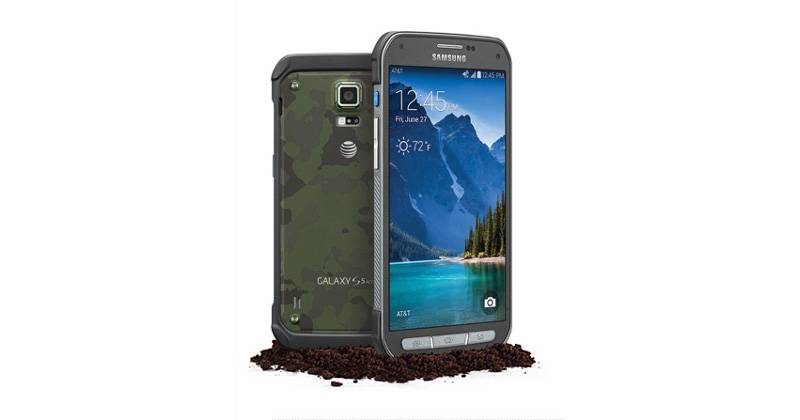 Since the cat is already all but out of the bag, AT&T has seemingly gone ahead of its rumored June announcement. Now the Samsung Galaxy S5 Active is real and official, and it is exactly what we’ve seen so far, nothing less, and perhaps unfortunately, nothing more as well.

Once and for all, the screen is officially confirmed to be a 5.1-inch 1080p AMOLED display, exactly the same as the Galaxy S5. And, of course, that’s not the only thing the two have in common. There’s also the 2.5 GHz Qualcomm Snapdragon 801 processor, 2 GB of RAM, 16 GB of internal storage, expandable up to 128 GB, and the 16 megapixel rear camera. Of course, there’s is also the heart rate sensor, which will be an important feature for more active users.

The real difference between the Galaxy S5 and this new Galaxy S5 Active really boils down to the extra dose of ruggedness that the later exudes. Aside from the IP67 dust and water resistance score already present in both devices, the Galaxy S5 Active adds another medal to its coat, that of MIL-STD 810G, the latest version of the military standard for shock resistant equipment. On the software side, there is also the addition of the Activity Zone app that was earlier leaked, bringing together all the activity and health related apps and features of the smartphone. It also confirms the presence of a barometer inside the device.

Because it is practically the Galaxy S5 augmented with rugged features, we speculated that the price will also be augmented compared to the flagship. This is perhaps one of those times when we wished we were wrong. AT&T will be selling no-contract Galaxy S5 Active units for a not insignificant $714.99. This is quite a lot compared to the Galaxy S5’s $649 price tag. The carrier will, however, be throwing buyers a bone, shaving off $50 from the Samsung Gear Fit should they decide to buy one as well.