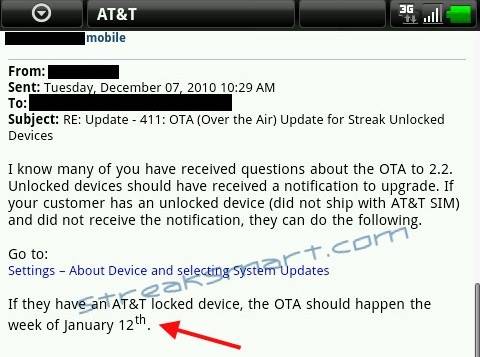 Dell’s firmware update for the AT&T Dell Streak, bringing the 5-inch tablet to Android 2.2 Froyo, has reportedly been delayed until January 12 2010. That’s according to some leaked emails handed to Streak Smart, supposedly from inside either Dell or AT&T, claiming the update for carrier-locked Streaks “should happen the week of January 12th.”

Meanwhile, unlocked Dell Streak units ordered from Dell.com and delivered with Froyo pre-installed aren’t expected to ship now until December 26. In fact, according to some buyers who grabbed one when they were first put on sale, despite the Dell product page suggesting the Streak now comes with Android 2.2, their units have been delivered with 1.6 instead.