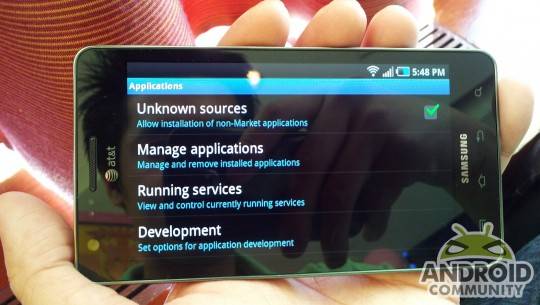 It appears that AT&T have listened to the millions and billions of cries from the republic to take the hold off the option to sideload apps. Up until now, AT&T phones running Android were not allowed the same option that other carriers kept available, that being the ability to install applications from sources other than the Android Market. All that changed, it seems, when the Infuse 4G was released into the wild less than a month ago. It’s been confirmed here by a mail that’s being sent out to AT&T developers saying that this change will be standard through the future.

Joy unto the mountains! Now I can load Gameloft games and whatnot! Having an Android phone that disallowed sideloading apps was like owning a car that only allowed you to put one kind of gas into it. Sure it worked ok, but what if I want premium gas? AT&T turning the switch back to optional is like a renewed ability to do anything to their devices, including pouring super tasty sugar into the tank. And what about that Infuse 4G?

It was and is a big deal that the Samsung Infuse 4G allows the 3rd-party installation of apps because it’s the first AT&T phone to do so. It’s also a big fat amazing fantastically bright display-having Samsung phone having the largest Super AMOLED Plus display in the world, so loading up some non-market games is certainly a perk for those wanting utterly excellent bigtime winners via the Amazon App Store, for example. Freedom forever!