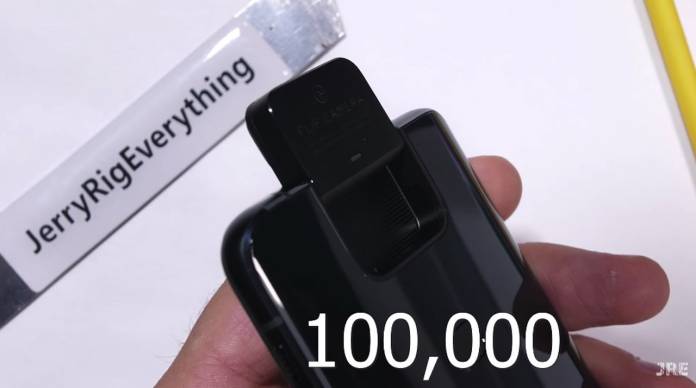 The ASUS ZenFone line doesn’t exactly beat those series from other big OEMs but ZenFone models–a lot of them– become popular for unique reasons. This time, the ZenFone 6 is making waves with the new camera design. The phone that allows you to ‘Defy Ordinary’. A ZenFone 6 Edition 30 was released in time for ASUS’ 30th year. It’s turning heads right now because of the flip camera design that allows you to use the main camera as a selfie shooter. This means you are using the same camera system for both regular captures and selfie shooters.

The camera uses a motorized mechanism so there is the question of durability. We’re certain ASUS has prepared for this concern.

Obviously, Zack Nelson is ready to check the ASUS ZenFone 6 with a Scratch, Burn, and Bend test. Watch the full video below:

The usual tests are done. Scratching the front glass has reached level 6 with deeper grooves at level 6. The sides and rear aren’t scratch-fee but even with all those scratches, the phone isn’t damaged. It is recommended you get a protective phone case.

The large 6.4-inch IPS LCD only lasted eight seconds under direct heat. The pixels turn black and then turn but fully recovers.

When it comes to the bend test, bending the ZenFone 6 from both front and back doesn’t damage the phone.

The most interesting part of the ASUS ZenFone 6 is really the camera. Asus said it is ready for about 100,000 flips. That is about a hundred times of flipping each day for three years. The 100 flips in a day are too much because you won’t be using the cameras many times .

The ASUS ZenFone 6 seems to be very robust. It can endure drops as the camera automatically retreats when it detects the device is falling.