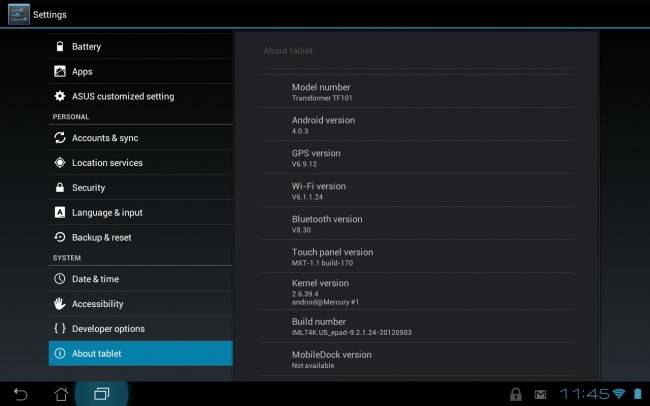 The folks over at ASUS are pushing out another minor update for their popular NVIDIA powered Eee Pad Transformer tablet. It’s seen more updates than most tablet around but they are all quite small. Today’s however brings a few more needed bug fixes, as well as Android 4.0 Ice Cream Sandwich‘s popular face unlock feature.

First off the update is build version 9.2.1.24 according to Droid-Life and brings the much awaited feature of ICS Face Unlock. Now users can unlock the device using the front facing camera. While this isn’t anything important it has been missing and was recently added to the Prime. Another change was a few software side fixes for the casual reboot users still have, as well as Bluetooth.

Bluetooth was updated from v8.27 to v8.30 and should have improved connections as well as enhance stability for multiplayer games and streaming audio. I’ve never really had issues with WiFi or Bluetooth on mine so can’t really comment on that part of the update. ASUS recently started showing full change-logs and you can find out everything from the update at the source link below.